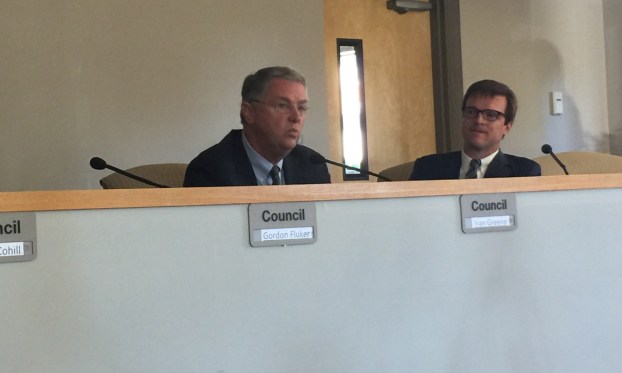 Frank Holleman, SELC senior attorney who has fought many legal battles with utilities over coal ash, visited Wilsonville on Oct. 19 to speak with the community about the dangers of coal ash ponds. (Reporter photo/Briana Harris)

WILSONVILLE – Alabama Power announced in 2015 that it would close and cover its coal ash ponds to comply with new coal ash rules finalized by the U.S. Environmental Protection Agency that same year. If closed and capped, the coal ash ponds would be left in place forever.

Alabama Power’s plan doesn’t sit well with Wilsonville Mayor Lee McCarty. He is calling on Alabama Power to rethink its plan to close and cap an unlined coal ash pond located at its E.C. Gaston Steam Plant in Wilsonville.

The utility’s plan is to remove as much water from the pond as possible and cover the remaining coal ash with fill material. It would then be topped with a synthetic liner and covered by dirt and grass.

“We have carefully studied the alternatives the EPA has provided, and we have concluded that close-and-cap is the better of two safe options,” said Alabama Power spokesman Ike Piggot. “We consider the safety and security of our customers and the community as our highest priority.”

During an event called Coffee with the Mayor on Thursday, Oct. 19, McCarty and representatives from the Southern Environmental Law Center shared safety concerns with the public about the unlined coal ash pond that sits below the groundwater line and covers about 270 acres.

Coal ash is the waste that’s left over after coal is burned to produce electricity. It contains toxic heavy metals such as mercury, lead, arsenic and many others. The Wilsonville coal ash pond was established in the 1960s prior to federal regulations requiring coal ash ponds to be lined.

“If you put an unlined coal ash pond near a waterway, there’s a high risk of groundwater contamination,” said SELC senior attorney Frank Holleman, who has fought many legal battles with utilities over coal ash. “It is inevitable. You don’t have to be Joe Chemist to figure that out.”

McCarty worries that the harmful substances from the coal ash will infiltrate the groundwater from the unlined pond and contaminate the Coosa River. McCarty said the Wilsonville coal ash pond stores 23 million tons of toxic waste. He and the SECL would like to see Alabama Power close the unlined coal ash pond and either recycle the coal ash or relocate it to a dry, lined storage pond. Recycled coal ash is used to make cement. Holleman said the coal ash is diluted enough during the cement process to where the contaminants don’t cause harm.

Pigott said he wants to reassure the public that the safety of the community is paramount to Alabama Power.

“We have employees who live and work in Wilsonville, too,” Pigott said. “The EPA has determined that closing and capping-in-place is a safe and effective option. It is safer and more cost-effective for our customers to cap the material in place, where we can monitor it.

“There are additional risks when you start to remove and move materials over roadways or rails through communities to other locations where we would have less control. Transporting the material alone poses additional risks, including the potential for spillage and vehicular accidents, among other potential challenges.”

But past coal ash spills loom and serve as a reminder of the worst possible cases. In February 2014 in North Carolina, an underground pipe burst at a Duke Energy steam station, spilling nearly 39,000 tons of coal ash into the Dan River. In December 2008 in Tennessee, a dike failed at TVA’s Kingston Fossil Plant, dumping 5.4 million cubic yards of coal ash into the Emory and Clinch rivers and smothering about 300 acres of land.

“We’re not trying to be over the top, we’re just trying to protect the health and safety of people in Wilsonville and Shelby County,” McCarty said.

“That doesn’t solve the basic ongoing problem,” he said. “There’s still the issue of groundwater contamination. The issue is the movement of contaminants underground.”

“The coal ash is in the sediment in the river,” he said. “It doesn’t go away.”

Alabama Power has never had a spill at any if its ponds, Pigott said.

“Alabama Power has had an inspection program for ash impoundments for more than 40 years, and we have never had a failure,” he said. “There were no regulatory requirements for such inspections prior to 2015, yet we have been responsibly doing so anyway.”

Pigott said Alabama Power is committed to meeting all of the EPA’s lagal and regulatory requirements once the pond in closed. That includes monitoring and maintaining the facilities and the groundwater for 30 years after the pond’s closure.

Most of the Wilsonville residents in attendance at the Coffee with the Mayor event said they simply wanted to become more educated on the coal ash issue and had yet to take a side on the matter. A few weren’t convinced that the coal ash pond posed much threat to Wilsonville. One resident said Alabama Power has always been a “good neighbor” to Wilsonville and wouldn’t do anything that would jeopardize the safety of residents.