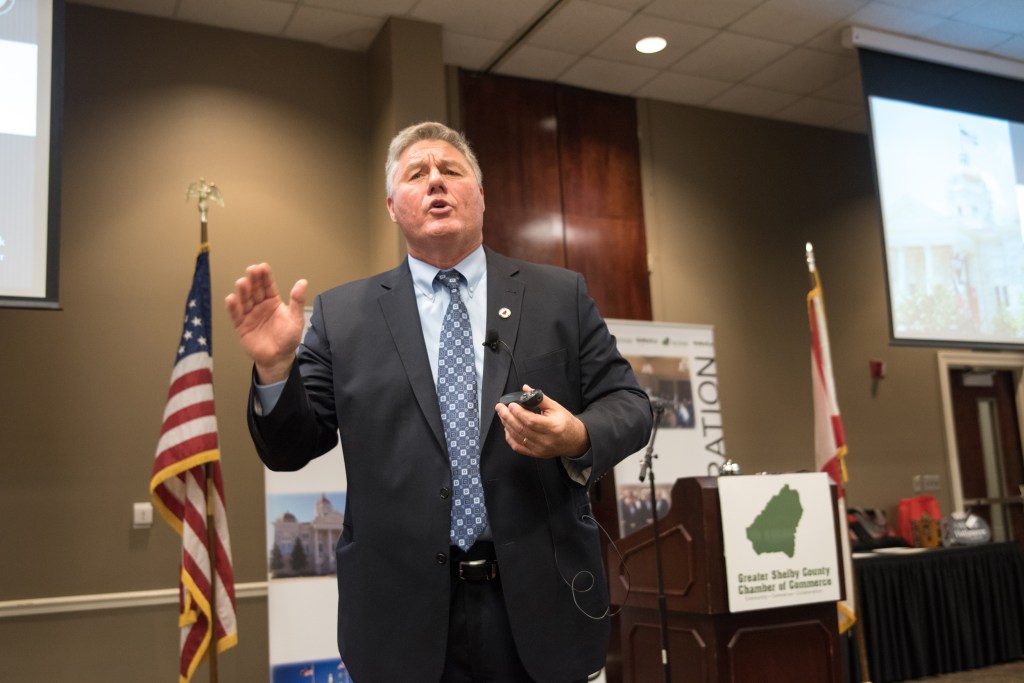 County Manager Alex Dudchock gives an overview of projects within the county at a luncheon on Oct. 25. (Reporter photo/Keith McCoy)

PELHAM – Shelby County Manager Alex Dudchock provided an overview of the progress made in the county during fiscal year 2017 at the Greater Shelby County Chamber of Commerce’s annual State of the County Address on Wednesday, Oct. 25, at the Pelham Civic Complex.

Dudchock highlighted several of the county’s accomplishments over the past year, including adding more hangars at the county airport, upgrades at Oak Mountain State Park and projects being completed in partnership with county municipalities.

Twelve more airplane hangars are set to be constructed at the Shelby County Airport, Dudchock said.

“We won’t be building any more for a while after this, but we will still have a waitlist for people wanting a hangar,” he said.

The BMX track at OMSP, the largest state park in Alabama, was lengthened taking the track from 900 feet to just over 1,100 feet. Upgrades at the facility also included rebuilding and asphalting the turns, improving the concessions and bathrooms, adding additional lighting and improving fences.

Dudchock said he got the most feedback from the public about the upgrades at OMSP’s Beaver Lake. The project included adding three new piers, two beaches, a sand volleyball court, a sidewalk and installed fish habitat in various areas.

The county also executed agreements with the cities of Pelham and Alabaster to complete projects within the cities. The county is partnering with Pelham to construct four sand volleyball courts, two outdoor basketball courts, a pavilion with restrooms, associated parking and a trailhead connector at Pelham City Park where the newly built Pelham Park Middle School is located. A recreation center and library are also being constructed at the park.

In Alabaster, the city is partnering with the county to construct a pavilion for the drone field/course at Veteran’s Park. Dudchock said the drone field will be ideal for academic competitions for area schools.

The county also has an agreement with Alabaster City Schools to add lighting, public seating and restrooms in the new high school track and field complex. The county will have access for the interior athletic field to host sporting events. The field will meet NCAA lighting regulations for soccer and lacrosse.

“We’ve got projects happening all over the county,” Dudchock said. “This presentation doesn’t even begin to cover them all. We’ve got more projects than I’ve got time to talk.”