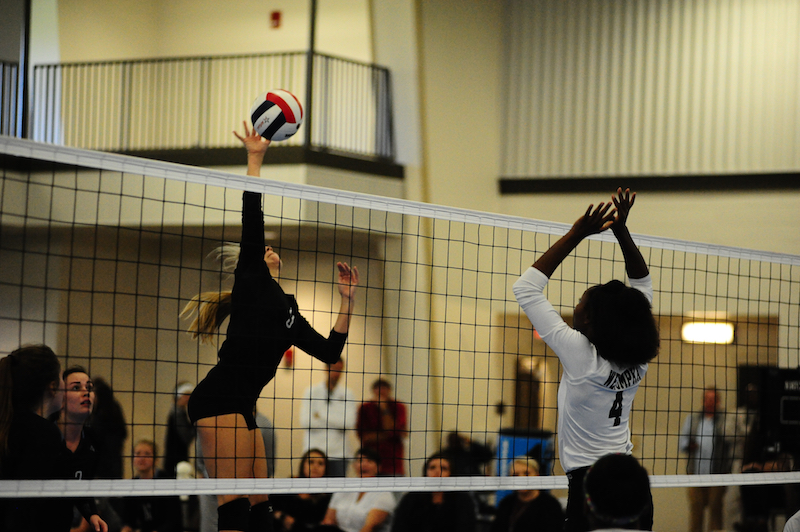 The Helena Huskies volleyball team swept both G.W. Carver and Wetumpka in the AHSAA 6A South Super Regional and will advance to the Elite 8. (Reporter Photo/Graham Brooks)

MONTGOMERY–The Helena Huskies volleyball team will be heading to the Elite 8 of the AHSAA State Volleyball tournament after sweeping two matches on Thursday, Oct. 26, in the AHSAA 6A South Super Regional tournament.

Next up, was a matchup against the Class 6A Area 6 winning Wetumpka Indians in the quarterfinals with a spot in the semifinals on the line.

The first set was about as close as it can get as Helena and Wetumpka traded blow for blow until eventually the Huskies pulled away for a 26-24 first-set win.

In set No. 2, the Indians raced out to an 8-2 lead but Helena stormed back with seven straight points to retake the lead at 9-8. The Huskies didn’t take their foot off the pedal and stormed back for a 25-17 win in the second set.

Helena needed one more set to advance to the semifinals of the South Super Regional on Friday, Oct. 27, and did just that by winning the third and final set 25-19 to complete the sweep.

The Huskies had to resort to a shuffled lineup in the quarterfinals because of an injury to a starter. Helena head coach Amanda Lewis said the change reflected in the teams’ performance against Wetumpka, but she was happy to get the win.

“My other starting outside hitter pinched a nerve in her neck in game three of the first match of the day so I played our DS as my outside hitter,” Lewis said. “It was challenging, but I think that she did a great job stepping in and fulfilling her role. We have a lot of things that we need to work on in order to compete tomorrow but if our team is healthy and we’re working together it’ll be a fun game.”

The Huskies will now take on Daphne in the semifinals of the South Super Regional at 12:45 p.m. on Friday, Oct. 27.

For advancing to the semifinals, Helena will move on to the state tournament the week of Oct. 30, regardless of the outcome on Oct. 27.

“It is cool, especially because it is year four of the school,” Lewis said of reaching the state tournament again. “I think we went our second year and now we’re going our fourth year so hopefully we’re starting to establish something good here.”