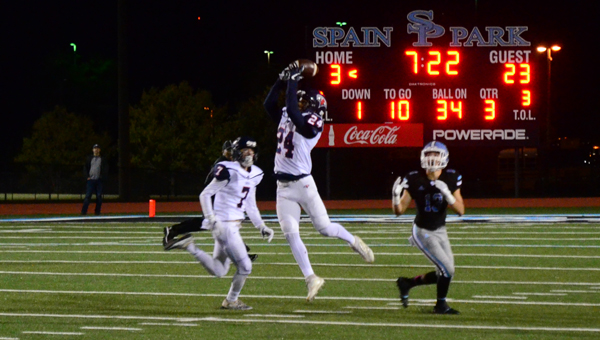 HOOVER – Playing for nothing but pride, Oak Mountain showed a lot of it in a 29-3 win over Spain Park on Friday, Oct. 27.

Oak Mountain was eliminated from playoff contention with heartbreaking loss at Mountain Brook the week before but responded positively.

“I had no idea how we were going to play on Friday, but we had by far our best week of practice (leading up to the game), OMHS coach Cris Bell said. “For them to bounce back…a lot of guys with a lot less character wouldn’t have responded like that. We’ve got a resilient group.”

The win snaps a five-game losing streak for the Eagles (4-5 overall and 2-5 in Class 7A, Region 3), though they were close the past couple of weeks.

Spain Park (5-4, 3-4), meanwhile, is playoff bound as the fourth seed from the region but must find some momentum, having lost four of their last six.

On Friday, neither team scored until Christian Hood’s 30-yard field goal with 4:12 remaining in the first half.

Spain Park netted minus-nine yards on its ensuing possession, and after a punt, Connor Webb capped off Oak Mountain’s first touchdown drive with a one-yard quarterback keeper followed by the point after from Hood.

The first of Zachary Nelson II’s three interceptions—and four total for the Eagles—followed.

Time appeared to run out in the first half on the interception return, but the officials ruled that two seconds should be added back on, and that was all the time Webb would need to pass 28 yards to Carson Bobo, who completed a leaping catch by falling in the front left corner of the end zone to finish a scoring flurry from the Eagles that Spain Park could never recover from.

The hosts drove down the field on their first possession of the second half, thanks in part to a highlight reel catch by Kenyon Hines, but the Jaguars could manage only a 22-yard field goal to Cole Starr.

OMHS responded with a 70-yard drive the culminated with a two-yard touchdown run by Luke Percer and extra point to make the score 23-3 with 4:40 left to play in the third quarter.

The final score of the game came on a 15-yard pass from Webb to Bobo.

Jonathan Bennett rushed 19 times for 73 yards, while Percer had 61 yards on 13 carries.