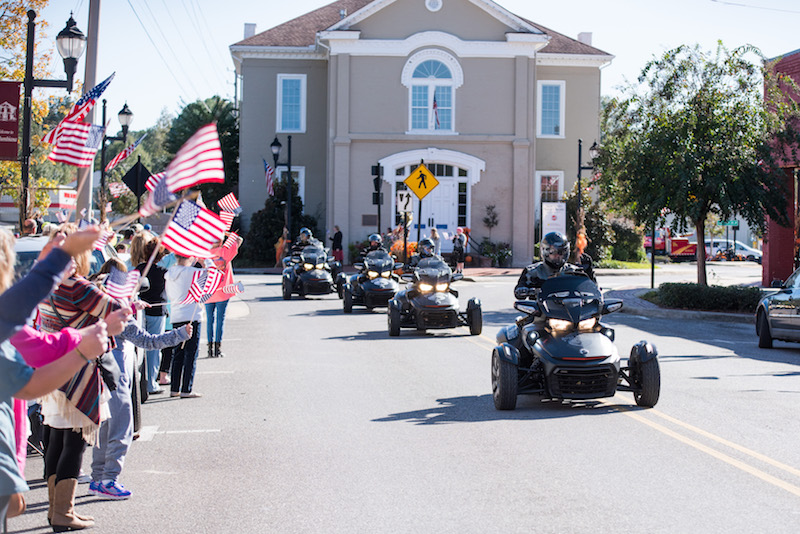 COLUMBIANA – Many Columbiana residents lined South Main Street to greet 10 recovering wounded veterans with the Road Warrior Foundation as they passed through the city on motorcycles at around 3 p.m. on Wednesday, Oct. 25. According to Columbiana Mayor Stancil Handley, the veterans rode through town as part of a 2,000-mile ride from Austin, Texas to Charleston, South Carolina.

“They were originally going to route for north Birmingham, but we asked them to come through Columbiana,” Handley said.

The veterans rode on Can-Am Spyders and were escorted through the Birmingham area by the Heart of Dixie Spyder Riders, American Legion Riders and Patriot Guard Riders.

Ervin and Baxley said they were glad to see so many people come out to see them.

“It has been awesome,” Baxley said. “Everyone has been so welcoming.”

“Especially with the police escort,” Ervin added. “Everyone was so friendly.”

According to a press release from the Road Warriors Foundation, the event provides “adventure therapy” to young, recovering veterans.

“As someone who has been through what our riders have gone through, I know how important it is for them to find their purpose again,” Road Warriors Foundation co-founder Craig Anders said. “Being able to get out there and have this kind of adventure and be independent enables them to regain a sense of direction. It’s a huge part of moving forward, and we thank the great people of Alabama for this amazing cause.”

Handley said he and other officials were honored to have the Road Warrior Foundation pass through, and thanked them and local veterans for their service to the country.

“Columbiana is very, very proud of our veterans, and this is a way to show that,” Handley said. “Columbiana welcomes the opportunity to do this. We realize that we wouldn’t have the freedom to do this without our veterans.”

After they rode down Main Street, the veterans stopped by the Columbiana Senior Center for a short reception before getting back on the road.