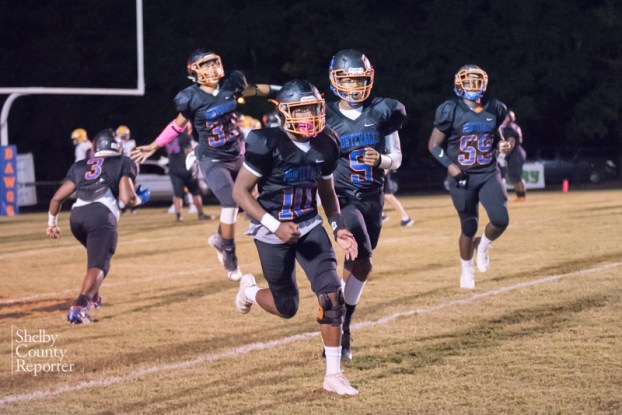 Montevallo picked up its first region win of the season on Friday, Oct. 27, by taking down Carbon Hill 28-22. (File)

By KARL HUNT | For the Reporter

MONTEVALLO, Ala. — The Montevallo High School Bulldogs defeated Carbon Hill in Region 4 play 28-22 to earn their first win in region play this season.

In their final home game of the season, Montevallo leaned on their defense to help lift the team to victory.

“Its always good to get a win and I’m really proud of this team.  Our defense really stepped up in the second half when we weren’t executing the way we needed to on the offensive side of the ball”, said Wilcox.  “That’s what you have to do sometimes to get a win.  The defense will have to pick up the offense and vice versa.  I’m really proud of those guys.  It was a hard-fought game that came down to the fourth quarter and I’m just proud of our guys for finding a way to get the victory.”

The first half saw both teams go blow for blow with each other.  Carbon Hill scored first on a 36-yard pass from Jonathan Madison to Michael Scoles to go up 8-0 on the Bulldogs.

Montevallo responded with a touchdown of their own after putting together a nine-play drive that ended when Davion Gilbert hit JJ Evans for an 8-yard touchdown pass to tie the game at 8-8.

After Carbon Hill responded with another touchdown to go up 16-8, the Bulldogs scored again.  This time it was on an 11-yard scamper into the end zone by Gilbert to tie the game a second time.

The Montevallo defense forced a fumble with 2:43 left in the second quarter to stop a potential scoring drive for Carbon Hill.  The Bulldog offense capitalized on the opportunity and drove the ball on a five-play drive and capped the drive off with a 25-yard touchdown run from Gilbert, his second of the night to take a 22-16 lead into halftime.

In the second half, the game turned into a defensive battle as neither team found the end zone until the fourth quarter.

Carbon Hill appeared to have the game in control early in the third quarter as they marched down the field in what was a 14-play, 75-yard drive.  However, the drive was stopped when the Montevallo defense forced another fumble in the red zone.

Carbon Hill tied the game at 22-22 after forcing Montevallo into a pair of interceptions in the fourth quarter.

Late in the fourth quarter and with their backs against the goal line, the Bulldogs forced their fourth fumble of the night and their third in the red zone to stall another Carbon Hill drive.

The Bulldogs moved the ball 46 yards before turning it over on downs and relied on their defense to come up big once again.  The defense held Carbon Hill to a three and out to give the offense another shot at breaking the 22-22 tie.

Montevallo scored the go-ahead touchdown in the final minutes of the game on a 71-yard pass from Gilbert that found a wide open Tavarius Holman streaking down the sideline to put the Bulldogs on top 28-22 with 1:25 left to play in the game.

Once again, the Montevallo defense was called on to step up and make a play.  That play came from Gilbert who was inserted on defense as a defensive back.  Gilbert intercepted Madison with 33 seconds remaining on the clock to seal the victory for the Bulldogs.

Montevallo allowed Carbon Hill to rush for 217 yards and allowed 403 yards of total offense but came up big on defense when it mattered most.  The defense forced five turnovers in tonight’s game that included four fumbles, three of them in the red zone, and an interception.

Orlandis Weeks led the Bulldogs on the ground with 63 rushing yards.

Montevallo wraps up their season on the road when they take on Fultondale next Friday night, November 3rd.  Kickoff is set for 7:00 pm.

One for the History books: Thompson beats Hoover for first time

By ALEC ETHEREDGE | Sports Editor  HOOVER – It was a 98-yard drive with 9:47 remaining in the fourth quarter that... read more