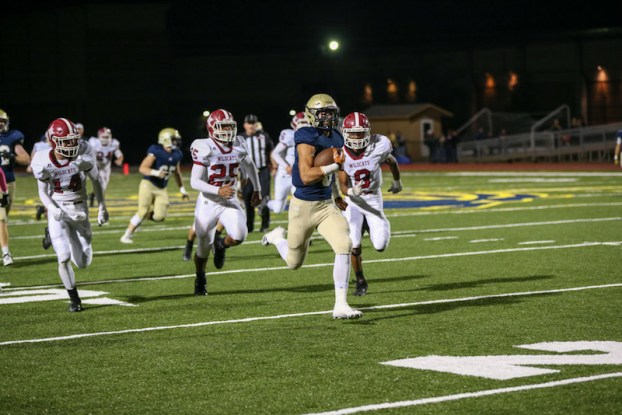 PLEASANT GROVE – With another region title in hand, the Briarwood Lions (9-0, 7-0) took it’s undefeated season on the road to visit the Pleasant Grove Spartans (5-4, 4-3) Friday, Ocotber 27th and got all they could handle. After falling behind 21-0 to start the game, Pleasant Grove’s defense shut out Briarwood in the second half, but ultimately fell by a final score of 21-14.

The Spartans also had a guaranteed playoff bid headed into the night, but struggled mightily to get any offense going. The Lions limited them to just 17 yards and five consecutive three-and-out’s to start the game. They were also given a steady dose of Briarwood running back JR Tran-Reno who ran for 103 yards and a touchdown on 15 first half carries. That and two disastrous punt plays lead to BCS’ three-score lead.

Pleasant Grove’s first punt of the game came out of their own end zone, but was sent spiraling upwards and bounced backwards toward the end zone. In the confusion Briarwoods’ Andrew Sherrod acted quickly, scooped and scored an easy return touchdown from just a few yards out. Later in the second quarter another ill-fated punt bounced off Pleasant Grove’s Joe Jones III’s hands and into the waiting arms of Briarwood’s Joseph Mungenast at the Spartans’ 31 yard line. The Lions scored just two plays later on Michael Hiers’ only touchdown pass of the night to Hudson Hartsfield to go up 21-0.

The Spartans were down, but didn’t give up and quickly used an 11-play, four minute drive to close the margin 21-7 by halftime on Xavier Hill’s one yard touchdown run. They followed it up with another quick drive to start the second half as Zyquez Perryman connected with Caleb Jackson on a 43-yarder and found Xavier Hill 36 yards later for his second TD of the night.

It seemed as if the momentum of the game was completely switching to Pleasant Grove when Alfred Sullivan picked off Michael Hiers’ pass on the next drive, but it wasn’t meant to be as BCS forced a three-and-out and two interceptions to stifle the Spartan attack. “Give Pleasant Grove credit for outplaying us most of the game,” said Lions’ head coach Fred Yancey. “They were hard to block. They played with a lot of energy and effort and they earned the good play they got out of themselves in the second half.”

“JR’s a good player, real good athlete, love’s the game and I can count on him to give us a good game just about every night. And when he gets cracks, he goes,” said Yancey.

Briarwood Christian and Pleasant Grove will head outside Region 5 next week to finish off their regular seasons. The Spartans’ will host the undefeated Indians of Pinson Valley while the Lions will welcome the Madison Academy Mustangs next Friday, November 3rd at 7 p.m.

By Chris Megginson | For the Reporter OPELIKA – Pelham was unable to claw its way out of an early... read more