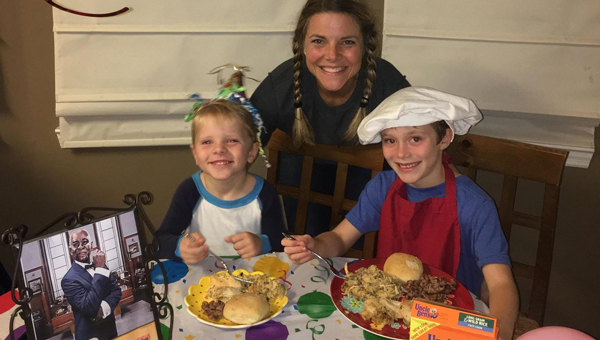 Ean Slauson, right, shown with his sister Caden and mother Wendy, is one of 25 finalists in the national Ben’s Beginners Cooking Contest. (CONTRIBUTED)

HOOVER – Seven-year-old Ean Slauson’s love of cooking with his family could benefit him and his school.

Slauson is one 25 finalists from across the country in the Ben’s Beginner’s Cooking Contest put on by Uncle Ben’s in an effort to inspire families to spend more time together in the kitchen.

Parents and children in grades kindergarten through eighth grade were invited to submit a photo of themselves preparing a rice-based dish together.

Five grand prize winners will receive $15,000 cash, a hometown celebration and a $30,000 cafeteria makeover for their school.

The winners will be determined by votes.

Those interested in helping Ean should visit Beginners.UncleBens.com and vote for the “PARTY WITH UNCLE BEN” picture. Votes can be cast once per day through Nov. 6, said Ean’s mother, Wendy Slauson.

“We need as many votes as possible,” Slauson said. “This is not only going to help us but the children in the community at the school.”

Wendy Slauson said she saw information about the contest online.

“We love to cook together, and I was like, ‘Hey, if we like to cook, we can enter this contest,’” Slauson said. “We never thought we would have a chance to become a finalist or anything.”

Over the course of a couple of weeks around the start of the school year, the family tried to submit a photo each day.

Ean Slauson, who attends South Shades Crest Elementary School, said his favorite things to cook are brownies and cookies. He said “spending time with my family” is his favorite part of cooking.