COLUMBIANA – A 45-year-old Alabaster man is facing a felony aggravated stalking charge after he allegedly violated a court no contact order, according to Shelby County District Court documents. 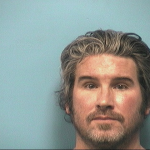 The Alabaster Police Department arrested Chad Clifton Franks, who lists an address on Ironwood Circle in Alabaster, on Oct. 24 and charged him with the felony second-degree aggravated stalking charge.

Aggravated stalking is a Class C felony, and is punishable by up to 10 years in prison upon conviction, according to Alabama law.

According to his arrest warrant, Franks’ charge came when he allegedly violated the conditions of a court no contact order by having contact with the victim named in the order on Oct. 22.

Franks was released from the Shelby County Jail the same day he was arrested after posting a $15,000 bond.

He is now set to appear in Shelby County District Court on Nov. 16 for a hearing.