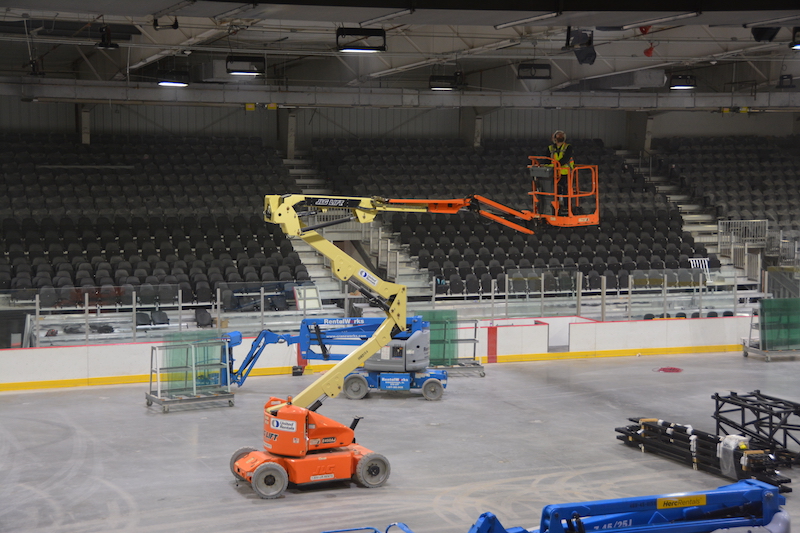 PEORIA, Ill. – After starting the season with a tough 3-1 loss to the Mississippi RiverKings, the Birmingham Bulls hit the road for the second consecutive weekend of SPHL play when they traveled to Peoria, Illinois, for a two-game weekend series with the Peoria Rivermen.

Birmingham was unable to pick up its first win of the season, as the Bulls capped off their three-game road trip to start the season with a 3-1 loss on Friday Oct. 27, and a 5-2 loss the following day after taking 1-0 leads in both games.

At the end of the weekend, the Rivermen sat in first place in the SPHL, while the Bulls—still searching for their first win—currently sit in last place in the league.

While the Bulls fell in both games, they did hold their first lead of the season in game one of the series as they took an early 1-0 advantage over Peoria.

Keegan Bruce scored the first goal after racing down the left-wing and flicking a shot just over Peoria goaltender Eric Levine’s glove. The goal came at the 11:38 mark of the opening period.

It’s a lead Birmingham held for the remainder of the first period.

Coming out of the first intermission, Peoria looked like a completely different team, however, as they scored three unanswered goals from Eric Witzel, Joseph Widmar and captain Dave Pszencyzny.

Jacob Parker and Gurtler added goals in the third period for Peoria, while Alexander Taulien slid one in for the Bulls for the final of 5-2.

While the second game started much the same and ended with a loss, Birmingham picked up its second first-period lead in two days and played a much closer game.

The opening goal of the game came on a power play when Jon Rey shot a one-timer off a pass from Brandon Fehd that went over Rivermen goaltender Mike Santaguiada’s outstretched body and into the back of the net with 8:44 to play in the first period.

It’s a lead Birmingham held for the remainder of the first period and a good chunk of the second period, but late in that period, Peoria made its first move of the game.

Cody Dion looked like he had the best chance to score after wrapping around the net, but his backhand missed and bounced to Mike Gurtler, who snapped the shot just under the crossbar for the game-tying goal with 5:03 remaining in the second period.

It wasn’t long after that the Rivermen took the lead for good. Bulls’ winger Taulien found himself in the penalty box for slashing and Peoria capitalized on the opportunity.

Dion took a pass in the slot and quickly fired a one-timer into the back of the net for a 2-1 lead with 1:18 left before the second intermission.

That score remained the same until 47 seconds remained and the Bulls were forced to empty their net for an extra attacker. Instead of scoring a game-tying goal, Birmingham gave up an empty-netter to Gurtler and lost 3-1 for the second time in a week after trailing by one in the final minute thanks to an empty-net goal.

Birmingham will now host its much anticipated first home game of the season this Friday night, Nov. 3, as the Bulls play host to Knoxville with puck drop set for 7:30 p.m. Knoxville is currently 1-1 on the season.