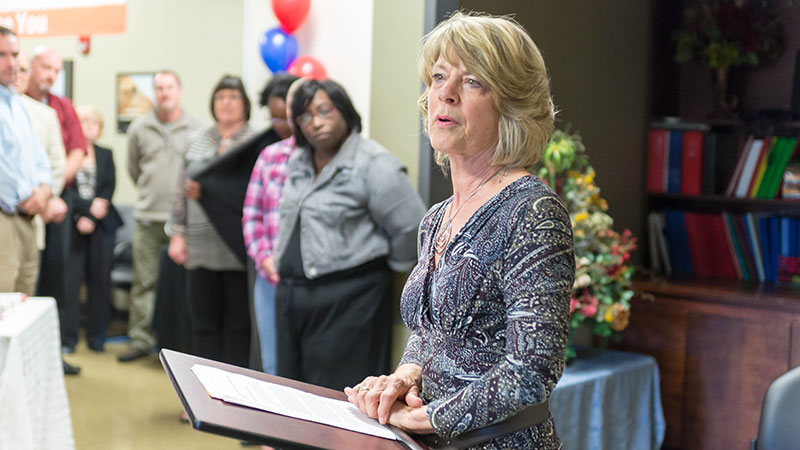 ALABASTER – Over the past few decades, hundreds of local children have been given a chance to get their educational careers back on track thanks to an Alabaster-based program aimed at granting second chances.

While the program typically focuses on celebrating students’ achievements and progress, it took a chance to celebrate a major milestone on Oct. 26.

“To think about the DAY Program turning 35 years old, it’s unbelievable,” DAY Program director Kathy Miller said during the program’s birthday celebration. “We just thought it was a time worth celebrating. We continue to serve children to the best of our ability every day here, and it’s only possible because of these pioneers here who helped the DAY Program get established back in 1982.”

The DAY Program, which is housed on the second floor of the Alabaster YMCA building off Plaza Circle, serves children from Shelby County, Alabaster and Pelham schools who are facing academic, disciplinary or attendance problems at their home high schools.

The program allows the students to catch back up on their classwork while working through any issues they were facing. After they complete the DAY Program, the kids return to their home high schools.

Former Shelby County Juvenile Court Judge Patti Smith helped found the program in 1982 to serve a segment of students who were being overlooked, she said.

“When I began my career as a Juvenile Court judge back in 1980, I recognized almost immediately there were some students who were falling through the cracks, and traditional educational programs just weren’t working,” Smith said.

Smith said the program began thanks to funding from the Shelby County Board of Education and a federal grant, but would not have survived without a few key individuals.

“There was one person who clearly understood the reality that I was experiencing as a new judge, and this person partnered with me from day one, and that person is Alan Fulton,” Smith said. “He was the person who was responsible for convincing the superintendent that the DAY Program was something that the school system should buy into. If it hadn’t been for Alan Fulton, I don’t think the DAY Program would be in existence today.”

“I don’t think the DAY Program would have survived the past 35 years without his interest in the students’ welfare and his unwavering and dedicated support,” Smith said. “Now, we have these wonderful accommodations, and Neil is responsible for that.”

Each day, all attention is focused on the needs of the students, the need to be secured, the need to be trusted and listened to, the need to be valued, to be cared for and supported. It’s truly a remarkable place,” Smith added. “What I’ve always seen the DAY Program to be is a place of second chances and it’s a place of restoration. I believe DAY works because every person who works here has an appreciation for each child’s journey.”