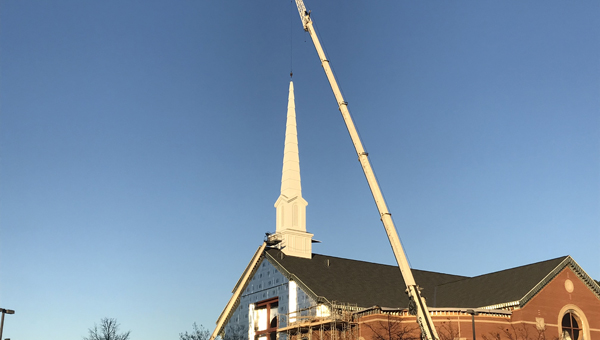 A steeple was installed on the new worship facility at Asbury United Methodist Church on Thursday, Oct. 26. (FOR THE REPORTER/JEREMY HUDDLESTON)

NORTH SHELBY – A steeple has been installed on the new worship facility at Asbury United Methodist Church that is visible from U.S. 280.

The steeple was installed on Thursday, Oct. 26, and construction is on schedule to be completed by Easter 2018, according to Bob Suellentrop and Alan Weeks, members of the church’s building committee.

“It kind of puts our stake in the ground that we’re going to be here for a while,” Weeks said.

Construction is underway on an addition to Asbury United Methodist Church that will allow the church to hold the largest traditional Protestant worship services in the area.

The church has outgrown its current sanctuary, which seats about 600 worshippers, and is building a new sanctuary that will hold about 1,200.

There will be about 15,000 feet of unfinished space that will allow for future growth.

The addition will attach to the existing church, which is located at 6690 Cahaba Valley Road and recently celebrated the 30th anniversary of its charter.

The current construction began on Dec. 8, 2016, and the project is estimated to cost about $14 million.

The new sanctuary will be only about four rows of pews deeper than the current sanctuary but will be considerably wider—an arrangement chosen so that worshippers do not feel too far removed from the pulpit.

New pews will have padded backs, which will be considered a seating upgrade.

The contemporary service has taken root and is also growing, though the church’s most pressing need is to be able to accommodate more people at the 11 a.m. traditional service, which fills the current sanctuary.

After the primary services are moved to the new sanctuary, the old sanctuary will house the contemporary service but also can be used as a more intimate setting for events including weddings and funerals.

Seating in the old sanctuary will be folding chairs instead of pews to allow for more versatility.

The current sanctuary will be refurbished to make it more conducive to contemporary services, and the back walls will be brought in some, which will create more room for office space and existing classrooms.

For more information about Asbury, and construction updates, visit AsburyOnline.org.