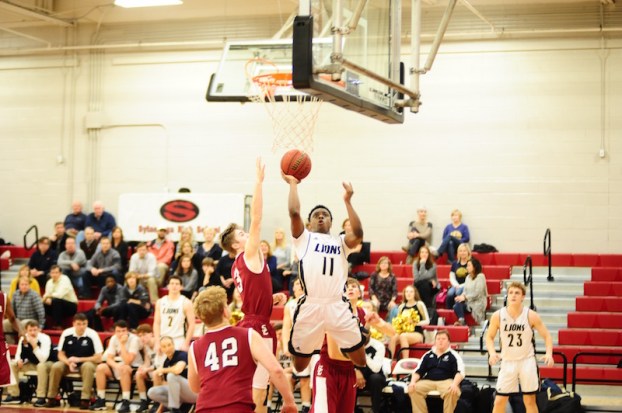 Izaiah Jones goes up for a floater against Shelby County in last year's area tournament. He will have a much bigger role on this year's team. (Reporter photo/Alec Etheredge)

NORTH SHELBY – The 2016-17 basketball season was an impressive one that led to the Lions making it to the super-regional round of the postseason for the first time since 2007, but it didn’t make the heartbreaking 55-52 loss to Booker T. Washington any less painful.

After leading much of the game, including 39-37 heading into the final quarter, Briarwood faltered late and fell 55-52.

“That was probably the most fun environment I’ve ever coached in,” Lions’ head coach Bobby Kerley said. “It was a tough way to go out, but it was a fun game to be a part of. Their fans and players were so courteous and just did things the right way.”

Heading into the 2017-18 season, Kerley is using that as a positive and knows he has a strong team back that can compete in the postseason again this year as they look for back-to-back super regional appearances.

Back on this year’s squad are two senior leaders that took a huge leap forward last season in point guard Carson Donnelly and shooting guard Michael Hiers—both of whom are stars on the undefeated football team as well.

Donnelley averaged 10.8 points, four assists, 2.9 rebounds and two assists per game as the point guard last year. He scored double digits in 17 of his 26 games with a season high of 21 points against Leeds. Donelley also led the team with 281 points and 105 assists.

Hiers averaged 10.7 points, 4.3 rebounds, 1.7 assists and one steal per game. He had 14 double-digit games a season ago, nine of which came in the last 12 games as he really started playing well down the stretch. 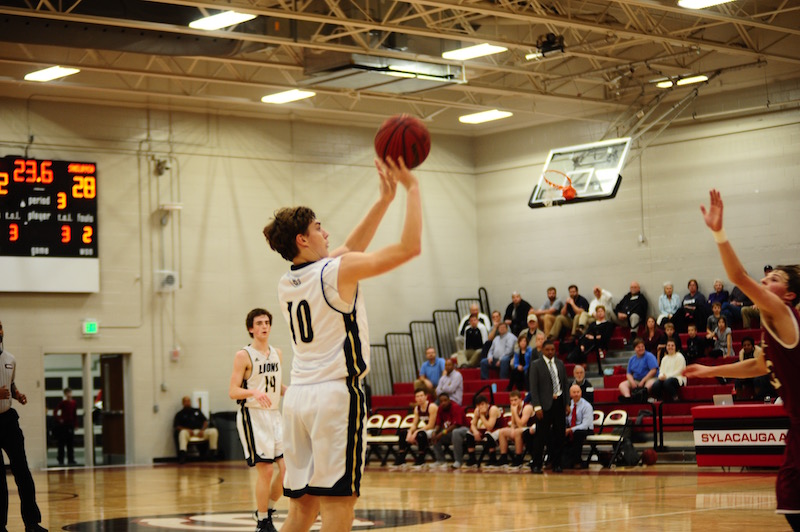 While those two are back and will be leaders on this year’s team, Barrett Tindall has graduated. He was the third of that trio that scored around 10 points per game and also had 4.6 rebounds, 2.1 assists and 1.2 steals per game last year.

“He had such a fantastic year for us last year,” Kerley said of Tindall’s senior season.

Izaiah Jones will be looked to fill Tindall’s role as a third guard for the Lions this year. Jones showed flashes of excellence coming off the bench in a 71-46 win over Shelby County in the area tournament, where he had eight points, two rebounds, two assists and one steal.

“He was kind of our sixth man last year,” Kerley said. “He’s been playing really well for us, not just last year, but over the summer as well. I’m excited about what he can do because he’s really good at attacking the basket and being a great athlete, he’ll be able to grab rebounds we wouldn’t normally get.”

Brayden Blythe is another starter back on this year’s team, but due to a torn ACL, he will miss half of the season. Blythe, who averaged 7.7 points and four rebounds per game as a junior, should be back in the starting lineup around mid-January.

Junior David Scharf will be his replacement and Kerley couldn’t praise his hard-work ethic enough.

“Man, we don’t have many guys that play as hard as that kid does,” Kerley said. “He is just a phenomenal effort kind of guy.”

Noah Whatley will finish out the starting five as the Lions’ center. At just a shade over 6-foot, Whatley will be looked at as a physical presence down low.

Kerley said that starting five is good, but they have an extremely good bench as well, highlighted by three seniors. Owen Lester, Garrett Bell and Patrick Blythe will be those guys looked upon to add depth off the bench, giving the team seven trustworthy seniors.

Kerley also added that junior Jack Deason is another guy to keep an eye on at the point guard position.

Just like last year, Briarwood won’t scare you with their size this season, but their physicality and the way they get after the ball is what makes them great.

“We’re not a big time, but we’re feisty,” Kerley said. “We try to do the little things the right way because we may be undersized, but that’s something we can make up for with grit.”

That will lead to a defense that tries to pressure the ball and take it away and an offense that penetrates and kick out for 3-point shots. Kerley said he feels very confident in outside shots this year and with Hiers back, who made 40 shots from behind the arc last year, he should.

“We have a couple of guys that can shoot lights out on the team this year,” Kerley said. “We’ve got guys accepting their roles whether it by driving or kicking it out or shooting the deep ball, which has created some beautiful basketball.”

Kerley said he saw flashes of that “beautiful basketball” during the summer, and that’s how he expects his team to be playing at the end of the year when the Lions are looking for another playoff push.

Briarwood will open the season at the Mortimer Jordan Thanksgiving Tournament on Saturday, Nov. 18.

By ALEC ETHEREDGE | Sports Editor PEORIA, Ill. – After starting the season with a tough 3-1 loss to the... read more