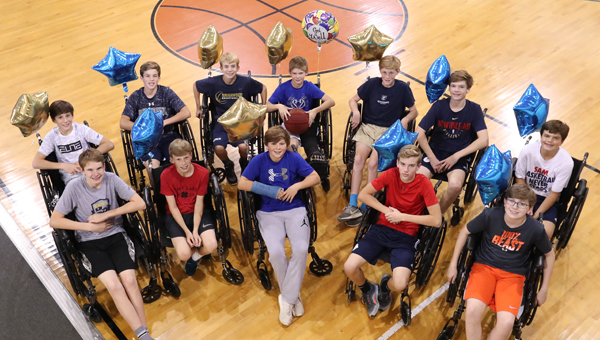 Maddox Graves (back row, center) and his Briarwood Christian School seventh grade basketball teammates played a game in wheelchairs after Graves sustained an injury that will prevent him from playing this year. (FOR THE REPORTER/DAWN HARRISON)

INDIAN SPRINGS VILLAGE – When Maddox Graves dislocated his kneecap, the Briarwood Christian School seventh grade basketball team member thought he would not be able to play the sport again for months.

But Graves and his teammates were surprised with a wheelchair basketball game on Friday, Oct. 27, at his home in Indian Springs Village before his surgery.

Peggy Cropp, mother of one of the other team members, said she saw a picture of Maddox in his wheelchair and thought it would be helpful to get the team together for a wheelchair basketball game.

“We wanted to do something to lift his spirits,” Cropp said. “He still has that drive to want to play.”

Cropp’s son, Dermie, had a birthday coming up but wanted to focus the event on Maddox.

Birthday cake was served following the game along with pizza.

Peggy Cropp contacted ONeal Medical in Pelham about renting wheelchairs, but when she explained what they were for, the company said they could have them for free for the day.

After finally being told why they were gathered at Graves’ home, the friends chanted “Mad Dog,” a nickname for Graves, as they entered the barn on his family’s property that houses a basketball court.

Inside, they found 12 wheelchairs with the last name and number of each player. The players were split into teams designated by blue or gold balloons attached to the wheelchairs, and parents served as referees for the game that ensued.

Graves injured his knee while practicing on the court at his home. He is scheduled to have surgery in November and will likely be out of action for 6-8 months, said his father, Matt Graves.

“It was a big deal because you get 45-50 kids trying out (for the basketball team), you’re excited to make it and then your whole year is done,” Matt Graves said.

Maddox Graves said he momentarily blacked out from the pain when he injured his knee.

The diagnosis was another blow.

“I was just sad that I wouldn’t get to play middle school basketball at Briarwood,” Graves said.

They may not can give him back the upcoming season, but Graves’ friends made sure he knows he will continue to be part of the team.