Woman devotes birthday party to packing gifts for others 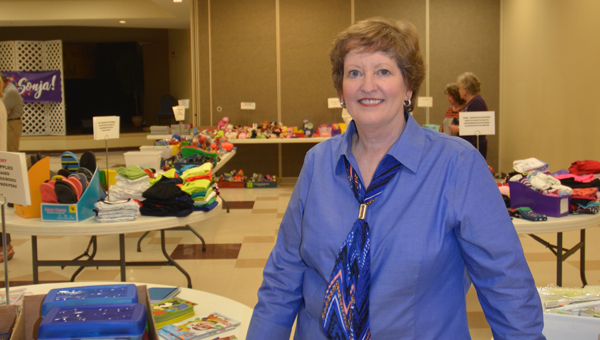 NORTH SHELBY – Sonja Bennett is well-liked, as evidenced by the large birthday party in her honor held Friday, Oct. 27, but the tables full of gifts were not for her.

Bennett decided to mark her 60th birthday by inviting friends and family to pack shoeboxes for Operation Christmas Child.

“I just thought it would be a fun way to get my friends together to do something good,” said Bennett, who coordinates the church’s women’s ministry.

The Samaritan’s Purse Operation Christmas Child delivers shoeboxes packed by donors along with an evangelistic message to children in need.

Friends were invited to participate in Bennett’s special birthday effort weeks in advance and many items were donated ahead of time.

The items were then sorted on different tables so that on the day of the party, Friday, Oct. 27, attendees could quickly grab a shoebox and fill it with the necessary items plus a few of their own choosing.

About 100 people helped with the effort, Bennett said.

Lynda Freeman, known at the church as the “Queen of Shoeboxes” because of her efforts with Operation Christmas Child, helped facilitate the event.

All boxes packed during the birthday party were targeted for the 10-14 age range, which Bennett said usually receives the fewest amount of shoeboxes.

The boxes also contained a personal message from Bennett: “We love you but most importantly we want you to know that God loves you — the Bible (God’s word) tells us so. The Bible also says that you are wonderfully made and that God has a special plan for your life. We will be praying for you!”

Bennett set a goal of 60 shoeboxes to be packed, corresponding with her age, but the group more than doubled that number and packed just over 120 shoeboxes.

Any items left over from the party will be put to good use, Bennett said.

“Nothing will go to waste,” she said. “Anything that is left over, we’ll use it next year.”