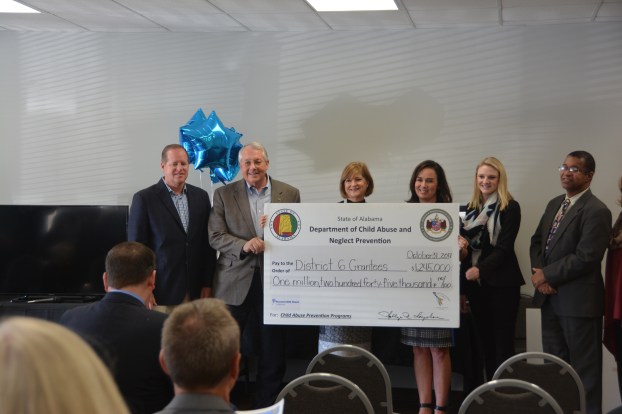 PELHAM – Sixteen local nonprofit organizations gathered at Vineyard Family Services on Tuesday, Oct. 31, to accept their portion of a $1.24 million grant from the Alabama Department of Child Abuse and Neglect Prevention (ADCANP).

The grant money will be distributed among 16 nonprofits that are located throughout Jefferson, Shelby and St. Clair counties. The organizations make up ADCANP’s District 6.

The local agencies will share funds to help protect vulnerable children who reside in these counties.

These state dollars are intended to provide annual funding of community based prevention programs throughout the state as well as create a self-sustaining pool of funds to provide for funding these programs in the future.

As Alabama’s only state agency designated to prevent child abuse and neglect, the department’s goal is to encourage and support each community in the state in their efforts to find new and effective solutions for preventing child abuse before it occurs, and ultimately strengthening Alabama families to prevent tragedies in the future.

During the Oct. 31 ceremony, two individuals who were helped by some of the organizations represented shared how the programs helped change their lives.

Orlando Burton, who participated in Vineyard Family Services’ three-month Fatherhood program, said the most important thing he learned during the program is how to have patience and be understanding.

“I learned that life is what you make it, and a lot it depends on how you respond to certain situations,” said Burton, who is the father of a 3-year-old daughter.

Aside from becoming a better father, Burton said the skills he learned have also helped him learn how to deal with other people.

Cyntekia Taylor, who graduated from IMPACT Family Counseling’s U-Turn program, said the 12-week program taught her how to become a better version of herself.

“I met teachers who truly wanted you to succeed,” she said. “I would recommend the program to anyone who wants to better themselves. I still keep in touch with my classmates and we’re trying to become our best selves together.”

Through the job placement component of the program, Taylor began working as a dispatcher at St. Vincent’s Hospital where she was a team leader overseeing about 120 employees. She worked in that position for more than a year.