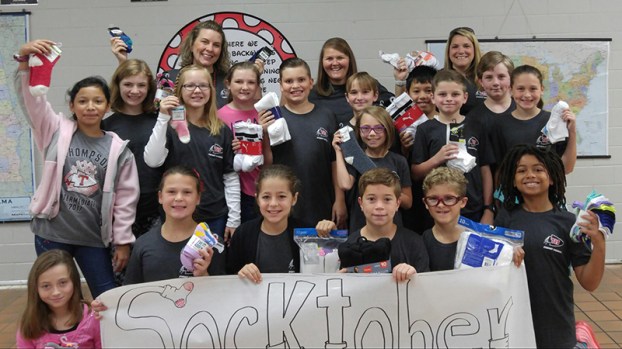 Students at Thompson Intermediate School held a sock drive during the month of October to collect pairs of socks to donate to local clothing closets. (Contributed)

TIS collects socks for those in need

ALABASTER – Students at Thompson Intermediate School held a sock drive during the month of October by collecting pairs of unused socks to donate to local clothing closets.

Now in its third year, the project aims to encourage students to bring pairs of socks to school during the month of October to donate to various churches in Alabaster that have clothing closets.

The project initially began by Kid President, and was brought to TIS, according to Dominguez.

The official website for Socktober states that each night in the United States, an estimated 600,000 people live on the streets.

For the month of October, the organization hoped to have two million people donate a pair of socks to help make a difference in the lives of neighbors who are homeless in various communities across the United States.

While the project this year was solely students at TIS, Dominguez said she anticipates opening the sock drive to members of the Alabaster community next year to help the project grow.

“We have collected everything from infant socks, socks with ruffles, women’s dress socks, and wool boot socks,” Dominguez said. “There are going to be some warm feet this winter in Alabaster.”

Dominguez said students at TIS enjoyed participating in the drive, and kids liked being able to donate pairs of socks to help those in need.

“Our Student Council kids come up with incentives to motivate their classes,” Dominguez said. “Each fifth grade class has student council members and they are assigned a fourth grade classroom. This is by far the best response we have ever received.”

HIS celebrates ‘Parenting Day’ on Halloween

By GRAHAM BROOKS / Staff Writer HELENA–Halloween was an eventful day for students and their family members at Helena Intermediate... read more