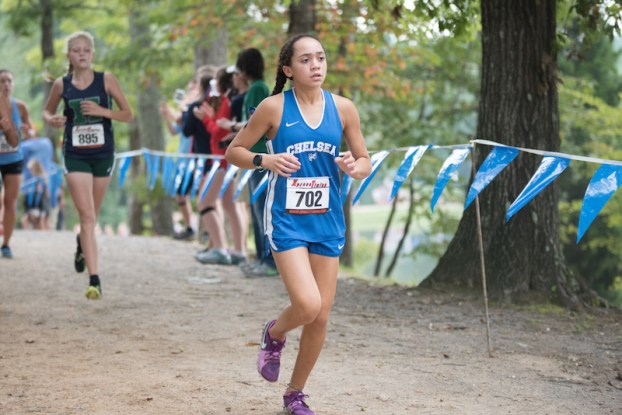 Chelsea's Teanna Cason, above, finished the race in fourth place to lead the Hornets in the sectional race. (Reporter photo/Keith McCoy)

HOOVER – The Chelsea Hornets’ cross country team has had an up-and-down season under first-year head coach Anthony Marino but embarked on a journey of changing the program as they took to the course at Veterans Park in Hooover on Thursday, Nov. 2, in the Class 6A, Section 3 meet.

It was a heartbreaking finish for the boys, who finished in fourth just 12 points behind the third place qualifying spot held by Gardendale. The Hornets’ boys team finished with 104 points, while the Rockets ended the meet with 92 points.

While the finish wasn’t exactly what they wanted to see, four Chelsea boys runners will still be headed to the state meet thanks to being four of the first six finishers not on a qualifying team.

Neuberger was the highest of the Chelsea finishers in 17th, as the junior finished the race with a time of 19:27.07.

Kennedy, a freshman, grabbed the fifth of those six spots with a finish of 24th and a time of 20:16.86. Phillip Dison, in 27th, finished just outside of the top six as he was 18 seconds slower than Shades Valley’s Braden Odom.

While the boys are only sending four runners, the Chelsea girls will be sending its entire team after a third place finish qualified them for state, a testament to what Marino was able to accomplish in his first year as the coach.

The team, who only has one senior, placed 10 girls inside the top 35—including five in the top 20.

It led to Chelsea grabbing the third spot in the Class 6A, Section 3 race with 58 points, which was a solid 63 points ahead of Gardendale in fourth.

As they have been all season, the Hornets were led by sophomore Teanna Cason in fourth place. Cason finished the event in 21:28.91, which was just behind the winning time set by Homewood’s Celie Jackson, who finished with a time of 20:30.73.

It marked her first top 10 finish since the first event of the season where she finished in seventh at the Chickasaw Trails Invitational, a place she’ll return to for the state championship race.

A lot of the rest of the runners haven’t run at the varsity level for much of the season, but that didn’t stop them from stepping up.

Eighth grader Avery Burleson was Chelsea’s next highest finisher and only other top 10 finisher, as she finished in 10th with a time of 22:31.41.

Esther Rabenau gave Chelsea a second eighth grader in the top 20 with her finish of 20th thanks to a time of 24:31.29.

The entire Chelsea girls team and those four boys runners will travel to Oakville on Nov. 11 to compete in the 6A State Meet.