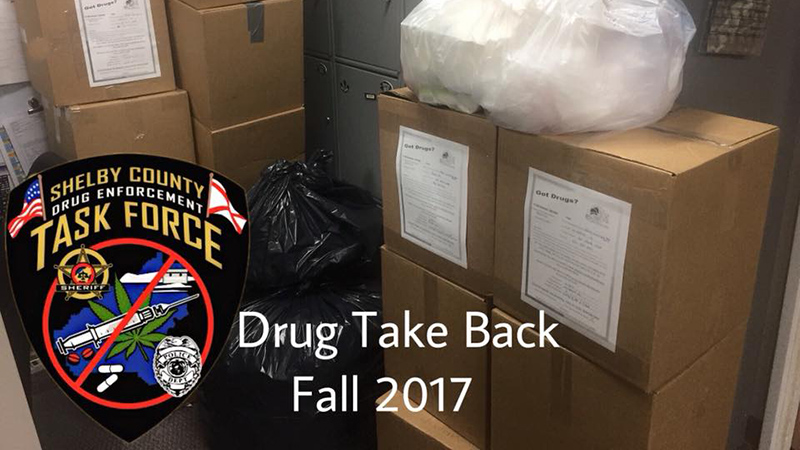 A couple hundred pounds of unwanted and unused prescription drugs have been removed from the community, cutting down on a potential source of drug abuse after Shelby County’s drug take-back day on Oct. 28.

Throughout the day, law enforcement agencies set up multiple take-back locations throughout the area to give locals a chance to ditch their unused prescription medications.

Officers were available at each location to answer questions and distribute information. The take-back was a “no questions asked” event for those dropping off prescription medications, and those wishing to remain anonymous were able to mark through their information on the pill bottle in permanent marker.

The Oct. 28 take-back locations were at Fred’s Pharmacy in Columbiana, the Greystone YMCA off U.S. 280, the Pelham Police Department, Target in Alabaster and Winn Dixie in Chelsea.

Although frigid temperatures and rain hit the area on the day of the take-back event, the Task Force reported receiving about 247 pounds of prescription medications.

This was one of the biggest and most successful Drug Take Back Days we’ve had, despite the weather,” the Task Force wrote on its Facebook page, noting the Samford University School of Pharmacy also helped during the event. “With your help, we collected nearly 250 pounds of prescription narcotics to be properly destroyed. Thank you, Shelby County!”