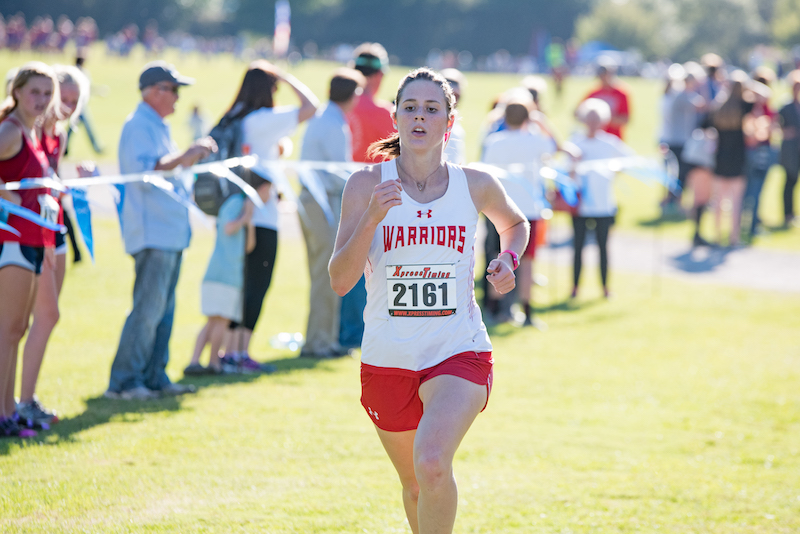 Thompson's McKenzie Hogue won the girls Class 7A, Section 3 meet and will head into the state meet with a ton of confidence. (Reporter photo/Keith McCoy)

HOOVER – While she still hasn’t finished a race in 18 minutes, her goal coming into the season, Thompson’s McKenzie Hogue has advanced to the 2017 7A State Meet after picking up her third win of the year at the Class 7A, Section 3 meet held at Veterans Park on Thursday, Nov. 2.

The win at sectionals not only marked Hogue’s third first place finish this season, but her sixth top three finish in seven events this season as she has yet to finish lower than sixth in any race.

Hogue won the race going away after posting a time of 19:17.87, which was almost 30 seconds faster than Mountain Brook seventh grader Reagan Riley’s time of 19:45.79.

She will now advance to the state meet where she’ll be one of the favorites to win the 7A championship.

While, Hogue made waves around the course for her impressive performance, the Oak Mountain girls were the only 7A county team to advance to the state meet after finishing in third in the sectional race.

The Eagles finished with a point total of 99, which was just 16 points ahead of Vestavia Hills in fourth, as the meet went down to every runner.

The first of the difference makers for Oak Mountain was none other than sophomore Nicole Payne, who has become accustom to clutch situations on the soccer pitch as well.

The Eagles’ next highest finisher was another sophomore in Evie Bell, who has been consistent all season. Bell finished third and sixth in the two events leading up to this and ended up taking 20th in the sectional race with a time of 21:28.08.

Just behind her in 22nd was freshman Emma Grace Phillips, who finished the race with a time of 21:31.83.

Oak Mountain had two other top 20 finishers in sophomore Adrienne Cooley and senior Anna McGowan, who finished in 26th and 29th, respectively. Cooley finished with a time of 21:52.94; while McGowan posted a time of 21:56.20.

For the Spain Park Jaguars, it wasn’t quite the finish to the season that the team wanted as they took fifth place in the team standings, just ahead of Thompson; but the Jags will have two runners competing in the state meet.

MacKenzie Culpepper and Holland Lidikay both finished as two of the top six runners outside of the top three teams that advanced to seal a spot at the state championship as well.

Culpepper was actually one of the strongest runners at the event, finishing the race in eighth with a time of 20:20.91. Lidikay finished not too far behind in 14th with a time of 20:47.15; while Mary McKinley just missed out on a berth in the state meet with a finish of 30th.

All qualifying runners, as well as Oak Mountain’s team, will now advance to the 2017 7A State Meet at Oakville Indian Mounds Park in Oakville on Saturday, Nov. 11.