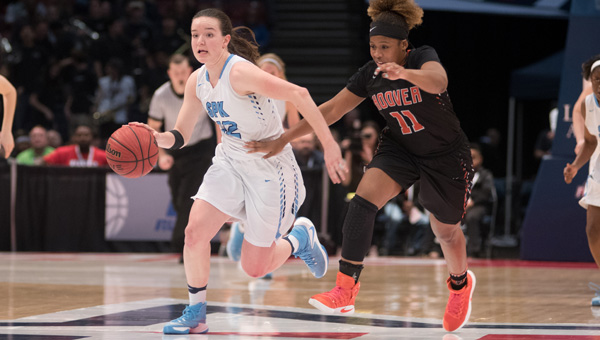 Claire Holt, left, was named to the All-State first team after a 2016-17 season in which Spain Park advanced to the state championship game. Holt, along with almost all of her teammates, returns this year. (FILE)

HOOVER – After coming within three points of a Class 7A state championship last season, Spain Park’s girls basketball team is in position to hoist the trophy this year.

A run through the playoffs that was perhaps surprising given their performance early in the postseason gave the Jaguars confidence that has carried over to this season because only one senior (Monique Speigner) was lost to graduation.

SPHS had to come from behind in the fourth quarter to defeat Mountain Brook in an area semifinal elimination game, then lost badly to Huffman in the next game.

“We didn’t end the season well,” coach Michael Chase said. “It probably started against Gadsden City with an 11-point comeback. After that, there was a different mindset with the kids.”

Spain Park ultimately fell to cross-town rival Hoover in the state championship game, but the Jags knew almost everyone would be back this season–including leading scorer and first team All-State selection Claire Holt, a senior guard.

The best part about the offseason, Chase said, is that the players have all put in individual work to improve in areas of their games the coaching staff identified.

“The kids have really done a good job of doing what they need to do to make themselves better,” Chase said. “I feel like everybody has come back better than they were last year.”

Also, senior Christen Rushing, a three-year varsity player, returns to action after suffering an injury against Huffman that forced her to miss the remainder of the playoffs.

“Usually, if you’re adding to the team, it’s a freshman or sophomore from the [junior varsity] squad, but here you’re adding a whole other varsity-caliber player,” Chase said. “She plays one of the forward positions, which if we had a need, that would be it. That gives us more depth and experience where we need it.”

Practices so far have been more competitive, including frequent scrimmages against the school’s freshman boys team, which share an athletic period with the varsity girls.

“Usually, by this time of the year, we wouldn’t be doing a whole lot of scrimmaging,” Chase said. “We’d be doing more installing, but we’re quite a bit further along this year. We’re just working on the smaller details.”