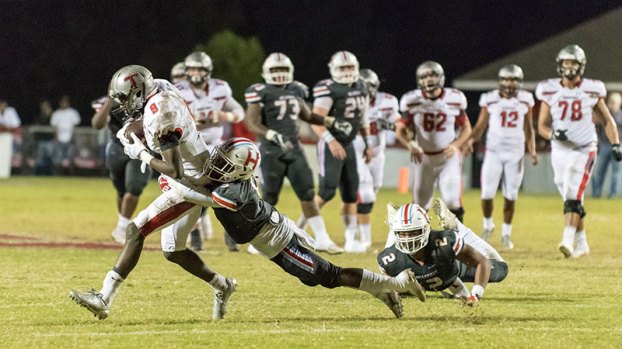 TUSCALOOSA – It may not have been the performance Thompson High School head coach Mark Freeman expected, but the Warriors did just enough to escape Hillcrest Tuscaloosa High School with a 33-27 victory and finish the regular season undefeated on Nov. 2.

Thompson was penalized 16 times for 130 yards in the victory, and THS quarterback Taulia Tagovailoa completed 27 of 50 passing attempts for 353 yards, four touchdowns and three interceptions.

“I made horrible decisions. I threw three interceptions, and I think that was mainly my fault they came back,” Tagovailoa said after the win. “I’ve just got to get back to the drawing board and work on it.”

After forcing a three-and-out on the Patriots’ first possession, Thompson scored on its first play from scrimmage when Tagovailoa found Ahmad Edwards for a 41-yard touchdown strike. A missed PAT put the Warriors ahead 6-0 with 10:35 left in the first quarter.

After forcing a turnover on downs a few series later, Hillcrest took a 7-6 lead when quarterback Tre Ross connected with Tab Beverly for a 40-yard touchdown strike.

Thompson then reeled off 20 unanswered points to close out the first half: Two on Tagovailoa touchdown passes of 25 and 18 yards to Alondae Vassar and Shad Byrd and one on a 1-yard Byrd run. Samuel Serrato split the uprights on two PAT attempts, but missed one to put the Warriors up 26-7 at halftime.

Hillcrest forced a THS punt on the Warriors’ first possession of the second half, and capped off a nine-play, 55-yard drive on a Chandler McDougal 4-yard touchdown run. A missed PAT cut Thompson’s lead to 26-13.

THS scored its only points of the second half when Tagovailoa connected with Michael Pettway for an 11-yard touchdown strike. Evan McGuire’s PAT put THS ahead 33-13.

From there, Hillcrest mounted its comeback attempt when Brandon Bishop intercepted Tagovailoa and returned 39 yards for a touchdown. The Patriots then recovered an onside kick and marched down the field to score again, cutting the Warriors’ lead to 6.

Thompson recovered the ensuing onside kick attempt, but was unable to get a first down, and was forced to punt the ball away with 1:04 left in the game. A few plays later, Thompson’s Jalen Bustamonte intercepted Hillcrest’s Colby Smelly to preserve the THS victory.

Several 7A boys qualify for state

By ALEC ETHEREDGE | Sports Editor HOOVER – In the section of death, all three of our county cross country teams... read more