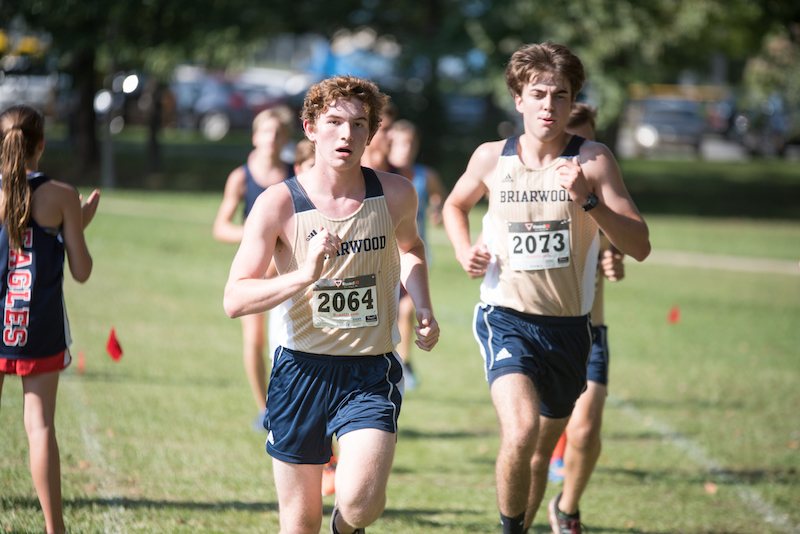 Briarwood will be sending both its boys and girls cross country teams to the 2017 5A State Meet on Nov. 11 after qualifying in sectionals. (File)

HOOVER – Both the Briarwood girls and boys teams have had successful seasons and took advantage of being the best team in Class 5A, Section 2 as both won the section championship on Thursday, Nov. 2, held at Veterans Park in Hoover.

Freshman Adrienne Goolsby led the Lions’ girls team by winning the individual section title thanks to a time of 22:20.48. It marked Goolsby’s second top three finish in 2017 and fourth top 15 finish.

Second and third place belonged to Anna Beth Hild and Cady McPhail, respectively. Hild, a senior, finished two seconds slower than Goolsby with a time of 22:22.88.

McPhail, just a seventh grader, showed how impressive of a young talent she is by finishing just behind those two with a time of 22:55.28.

Senior Meghan Talley was the last top 5 finisher for Briarwood as she took fifth on the nose with a time of 24:12.61. It marked Talley’s highest finish in any race this season.

Senior Laney Wagoner was the final top 10 finisher taking 10th in the standings with a time of 24:39.88. Chloe Lovvorn and Lauren Musachia finished 13th and 18th, respectively, to close out the race for the Lions.

For the boys, senior Zach Howard paced Briarwood with his second first place finish during the 2017 season, as he won the individual section championship. It marked his fourth top five finish dating back to the AHSAA All-Star XC Exhibition this summer.

Just two spots down from Howard was freshman Trent Malloy, who has had a strong season for the Lions during his first year with the varsity squad. Malloy, who finished the race in 17:55.63, has now finished in third and fourth in this last two races.

That fourth place finish came at the Jesse Owens Classic, where he finished with a personal-record time of 16:59.28. Malloy will now travel back to the same course where he set the record for the state meet.

Wade Herren also had a strong showing at the section meet, finishing in fifth with a time of 18:5.47. Freshman Joseph Bell was the final runner inside the top 10 with a time of 19:20.40, which was good enough for ninth place.

Calera’s Owen Marquardt and Jalen Pearson; and Shelby County’s Jesse Jones and Dewey Joiner all advanced to the state meet as well by being four of the top six individual finishers outside of team qualifiers.

Shelby County’s entire girls team will be going after a second place finish thanks to Jorja Nassirian, Mary Moore and Emilie Chapple all finishing inside the top 20.

Skylar Diaz of Calera was the sixth of six individual qualifiers to make it in the girls race.

All qualifying runners will advance to the state meet held at Oakville Indian Mounds Park in Oakville on Saturday, Nov. 11.