PELHAM – A Pelham man was recently released from the Shelby County Jail after being arrested by the Pelham Police Department and being charged with elderly abuse and neglect and third degree domestic violence. 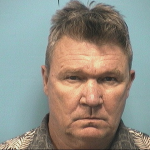 According to court documents, on Oct. 14, Louis Phillip Barrett, 56, who lists an address on Hayesbury Court, allegedly abused or neglected a 77-year-old victim causing physical injury.

A condition of his bond states that he cannot have any contact with the victim.