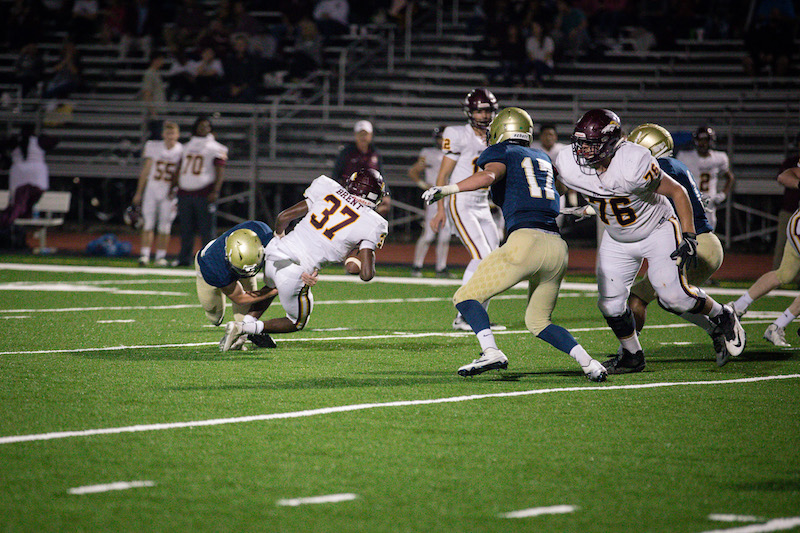 Briarwood's stout defense continued its impressive ways in a win over 4A powerhouse Madison Academy that led to an undefeated regular season for Briarwood. (For the Reporter/Adam Lee)

NORTH SHELBY – Briarwood Christian’s defense has been their calling card in 2017 and they saved perhaps their finest performance for their regular season finale. The Lions (10-0, 7-0) forced five turnovers and held 4A power Madison Academy (7-3, 5-1) to just 134 yards and their lowest point total of the season in 27-3 victory at home, Friday, Nov. 3.

The Mustangs came into the game on a seven game win streak and averaging 40 points in the process.

BCS head coach Fred Yancey knew his defense would have to zero in.

“We know that they’re real capable on offense so our kids took it as a challenge that we were going to have to match them. For our defense to hold them to three points is a pretty big deal really.”

The defense started out putting the offense in good position to score. Midway through the first quarter the Lions sacked the Mustangs after a fumbled snap on a punt attempt giving the offense a 35-yard field.

Six plays later J.R. Tran-Reno ran in the first score from two yards out to put BCS up 7-0. BCS went scoreless for the next 20 minutes including two fumbles in Mustang territory, but the defense held giving up only one field goal.

Then they took matters into their own hands. After a three-and-out from the offense coming out of halftime, the defense took the field at the Mustang 40-yard line (Madison Academy’s best field position to that point), stuffed Alex Carpenter for no gain and forced an incomplete pass in consecutive plays.

“I was dropping back in coverage, whipped my head around and saw the ball right in my face. Threw my hands up and I was running for my life,” laughed Hand.

Madison Academy never recovered. The Lions forced a three-and-out on the very next drive and the offense rewarded them putting together its longest drive of the night.

Everyone in the home crowd knew victory was imminent when Quarterback Michael Hiers rolled out on fourth and goal from the Mustangs’ 10-yard line, found a cutback lane, juked one last defender and dove in for the touchdown for the 21-3 lead.

A trick pass from Tran-Reno to Hudson Hartsfield after BCS’ second interception of the night put the icing on the cake–and the perfect regular season.

Still, Yancey knows the team must get a more balanced effort heading into the playoffs next week.

“We got to start blocking people up front,” he said. “If we’re going to make a big run we’re going to have to whip somebody’s defensive line and we didn’t do that tonight.”

Briarwood will host the Crossville Lions next Friday as the number one seed in 5A at 7:00pm. Madison Academy will take on the Eagles of Hokes Bluff at home next week as the number two seed in 4A Region 7.