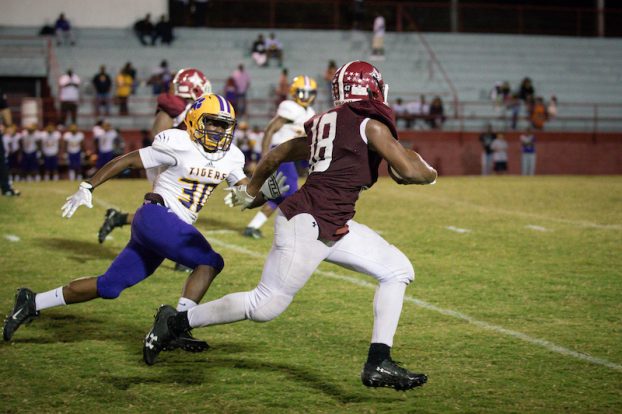 By RICKY RUSTON | For the Reporter

COLUMBIANA – The Shelby County Wildcats ended their 2018 campaign with a heartbreaking loss in the final seconds to the Jemison Panthers 28-27 on Friday, Nov. 3.

It was a senior night where all those players, band members and cheerleaders put on the cardinal and white for the last time during a fall season.

Coming off a four-game losing game skid, it was a night the Wildcats would play for pride.  A full moon hovered over Papa McCombs Stadium during Friday night’s game – it was chippy between two teams and it was bizarre.

Following the opening kickoff, the Wildcats offense nestled into their staple running game as they began their drive from their own 35-yard line.

Senior quarterback, Chadwyn Russ led his group down the field for 65 yards on 12 plays when he dashed in from the Panther 5-yard line to claim the early 7-0 lead following the point-after-attempt (PAT).

On the ensuing drive, the Panthers answered with a scoring drive of their own as a result of two critical fourth down conversions – one fourth-and-7 from the Wildcat 36-yard line and another with fourth-and-goal from the 1-yard line.

After much deliberation from the officials on the botched snap, Jemison’s quarterback snuck up the middle to tie the score 7-7, following the PAT, two minutes into the second quarter.

On their second offensive possession, the Wildcat offense had sewn together another scoring drive, but an unsportsmanlike penalty following a Trent Sullivan 11-yard scoring run clouded the drive as it pushed them out of extra point range and, ultimately, was the margin between victory and defeat for the Wildcats.  With 5:38 remaining before half, SCHS held the 13-7 lead

As two minutes approached before the half, Jemison took control at the Wildcat 44-yard line following a punt.

Four plays into the drive, Eric Evans rumbled up the middle from the 17-yard line for the score.  After the PAT, the Panthers held the slim 14-13 lead heading into intermission.

Coming out of the half, the Panthers would put together an 11-play, 77-yard scoring drive when the Jemison quarterback found the end zone again from the Wildcat 3-yard line.  Halfway through the third quarter, the Panthers had extended the lead to 21-13.

As the third quarter ticked along, when the Panthers rang the bell, the Wildcat offense answered with scores of their own.

Following a crucial fourth down conversion where Russ connect with Mitch Nash, Russ called his own number from the Panther 1-yard line for the score.  However, following a botched snap on the 2-point conversion, the Wildcats still trailed 21-19 as the 3rd quarter ended.

With 9:33 left in the fourth, the Wildcats’ defense held on a Panthers fourth down attempt at the SCHS 18-yard line.

Then, 88-yards later, Russ connected with Isaac Montgomery on a 16-yard scoring strike.  Following the 2-point conversion on a jet sweep over right end by Lamont Bush, the Wildcats had clawed back to claim the 27-21 lead.

With 4:21 left in the fourth quarter, the Panther offense dealt the yards, but the Wildcat defense held the rope as time ticked away.

Nestled in first-and-10 at the Wildcat 35-yard line, with: 55 remaining, Russ picked off a Jemison pass over the middle and attempted a return, but the ball was knocked away into the hand of a Panthers’ player.

Four plays later, Jemison rumbled in from the Wildcat 1-yard line to tie the game with the winning PAT to follow. After an already chippy game, the emotions boiled over and led to a fight on the field between both teams before the officials were able to clear everything up.

The Wildcats finished the night with 238 yards on the ground and 61 yards through the air.  Sullivan led with 79 yards rushing on 12 attempts.

Shelby County ended the season with a 3-7 overall record after losing five straight to end the season, including their last two games by a combined three points.