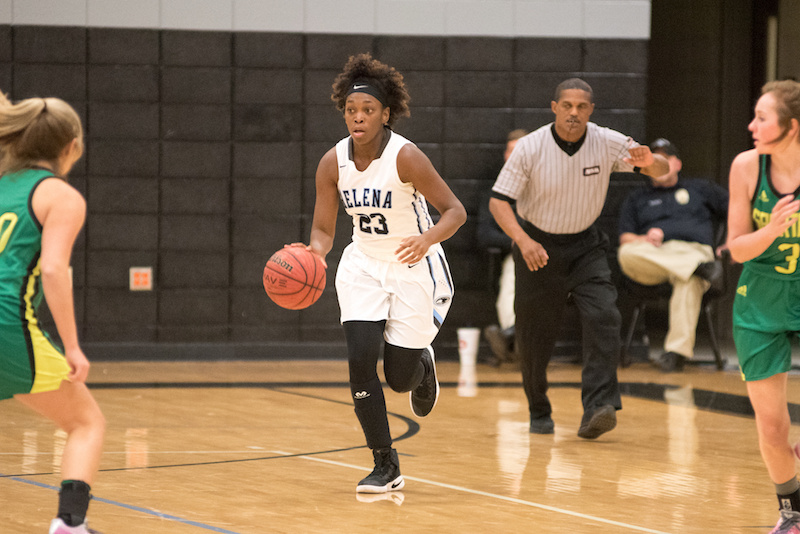 Jordan Jones (23) will look to have another stellar season as she will be one of the leaders in her senior season for Helena. (File)

HELENA–The Helena Huskies girls basketball team has been working hard all off-season as they prepare for the upcoming 2017-18 season and will eye another return to the postseason under the leadership of third-year head coach Alan Skinner.

After making an impressive run to the Sweet 16 last season, the Huskies will rely on two seniors for leadership, a few transfer players and a number of underclassmen as they begin their second season in Class 6A Area 8 for the 2017-18 season.

Helena will lose a big post scoring threat from a season ago in Jennifer Brown, who averaged 10.3 points, 7 rebounds, 2 steals and 1 assist per game in 2016-17, but the good news is the Huskies will return their leading scorer from a year ago.

Senior forward Jordan Jones has the ability to take over a game if she gets going and will easily be one of the biggest impact players in the county this season.

As a junior, Jones was a 2016-17 first team All-County player after averaging 17.4 points, 6 rebounds, 2 steals and 1 assist per game. The Huskies will rely on Jones’ scoring ability and senior leadership this season in a tough area.

The only other senior on Helena’s roster is Brandis Lang who will look to be another leader on a team that features plenty of freshmen and first-time varsity players.

Skinner said the Huskies will have to switch up their strategy for this season to make up the loss of Brown.

“Last year we lost Jen so we don’t really have much size,” Skinner said. “We’re going to have to play strong and fast. We’re going to be guard-heavy and we have to make up for that lack of size with a lot of pace and shooting.”

Skinner said he fully expects there to be a learning curve early in the season but hopes the team will begin to gel more and more as the season goes on.

“I expect us, the first few weeks of the season, to struggle a little just because we’re breaking in so many first-time varsity players and so many freshmen,” Skinner said.

Skinner said the team had plenty of time to bond this summer between practice and study hall and described the team as “A fun group to be around.”

The Huskies will open the season on Thursday, Nov. 9, at home against Mountain Brook at 7 p.m.