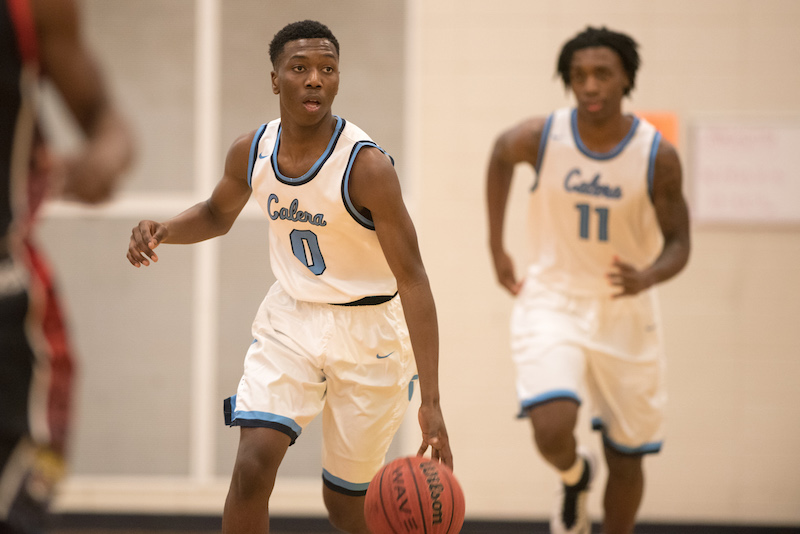 C.J. Smith will be an integral part of the Calera basketball this year as just a junior. He brings back 13.2 points per game from his sophomore season. (File)

But it’s also a season where they lost in the very next game 62-47 to Sumter Central in the sub-regional round of the playoffs to end their season short of the team’s ultimate goal—a state championship.

Heading into the 2017-18 season, head coach George Drake has a strong group of returning seniors and scorers that has him excited.

“They worked really hard this summer,” Drake said of his team looking to take the next step to become a championship team. “I think we’re hungry and ready for a strong year.”

While they have a lot of talent returning, the Eagles will lose leading scorer and rebounder Yatil Gant. Gant averaged 13.3 points and 8.3 rebounds per game during his senior season, giving Calera a large portion of production to fill.

“That’s definitely a hole that we have to fill,” Drake said of Gant’s production. “Yatil was crucial for us last year as the leading scorer and rebounder.”

Gant, along with the loss of two other seniors in Tyreke Wright and J.B. Brown, leaves the Eagles with some question marks, but a group of four tight-knit seniors is back to make the loss less painful.

Jacob Smith, Tyler Millin, Kevin Dowdell and Ahmon Catlin will be that group that has been together for years and can’t wait for their opportunity according to their coach.

“Collectively, that senior group has an opportunity to really be our leaders as a whole,” Drake said. “It’s a group that has been around. Kevin and Jacob are baseball guys, and Ahmon and Tyler have been with me for four years. All of them have been in the system and have experience.”

Smith and Millin bring back a load of experience to the team from their junior year and should be on tap for breakout years in 2017. Dowdell is a player that could also have a special season and while Catlin’s stats don’t always show up on paper, Drake said he’s a guy that makes the team better and a key piece to the puzzle.

While those seniors will be key, it’s a returning junior that will be the head of the snake for Calera this season.

CJ Smith will handle the point guard role and brings back 13.2 points and 2.2 rebounds per game from his sophomore season, which was good enough to earn an All-County third team nod last year.

“He’ll handle the ball for us and log a lot of minutes this year,” Drake said of his stud junior guard. “He can score a little bit from the outside or get to the basket. He can do a little bit of it all, especially offensively, and showed how special he can be last year.”

With football still underway thanks to Calera making the playoffs, Drake said there is still a little work to be done on finalizing the starting lineup, but several guys including quarterback Cornelius Brown are expected to join the team to help out.

Drake said the Eagles will run an up-tempo offense as they did last year and try to put up a lot of points every time out. It led to Calera scoring 80-plus on several occasions last season.

“We want to score quickly,” Drake said. “We’ll play inside-out. The goal is to get the ball inside first and then kick out if need be.”

To pair with that, they’ll run a press defense to force turnovers and make life difficult the full length of the court for opposing offenses. Drake said they have the potential to play more than one defensive style.

Calera will open the season on Thursday, Nov. 16, on its home floor against the Leeds Greenwave.