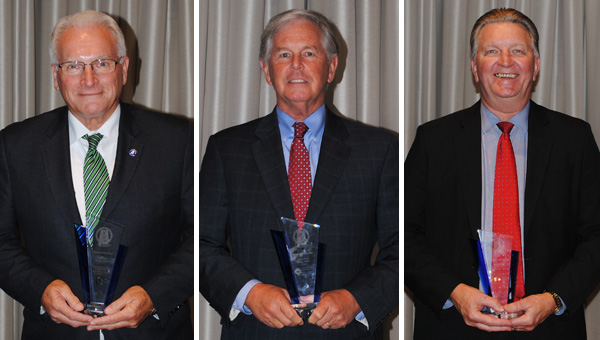 From left, Eddie Quinley, Darwin Metcalf and Delma Craft were recognized by the Alabama Grocers Association.

The food retail industry in Alabama provides 69,000 jobs with more than $2.2 billion in annual wages paid. Grocers pay more than $1.2 billion in state taxes and have a total economic impact on the state’s economy of more than $12 billion dollars.

More than 150 people attended the event at The Club to discuss the work of the Alabama Grocers Association in 2017 and those in the food, beverage and grocery profession in Alabama.

“Each of these fine individuals hold a special place within the Alabama Grocery Industry,” said Ellie Taylor, president of the Alabama Grocers Association. “They are committed to growing and improving the grocery industry in Alabama. We are thankful for the opportunity to honor them and their commitment.”

Vendor of the Year

Vendor of the Year is Eddy Quinley of Advantage Solutions.

Quinley, of Alabaster, started his grocery career as a direct retail sales representative with the Campbell Sales Company, followed by opportunities at The Hershey Chocolate Company and The Harper Sales Company.

In 1989, he started with Advantage Solutions Company in Mobile and is currently Business Development Manager calling on Associated Grocers of the South, Mitchell Grocery Corporation and Piggly Wiggly Alabama Distributing Company.

Quinley has been involved in the Alabama Grocers Association for over 12 years and joined the Board of Directors in 2013.

Quinley has received numerous awards and recognition for the work he has done in the food industry. He was awarded the Merit award from Campbell Sales Company in 1981 and 1987; and in 2009 received the Vendor of the Year award from the Associated Grocers of the South, the Broker of the Year from the Alabama Grocers Association and the Chairman’s Award from Advantage Sales & Marketing.

“It is a great honor to be chosen for this award. To think that the people I work with would vote for me to receive such a recognition is overwhelming.” Quinley said.

Retailer of the Year

Retailer of the Year is Darwin Metcalf of Western Markets.

Metcalf, of Hoover, started his career at 9 years old shopping and delivering groceries for his elderly neighbors from the local A&P on the Southside of Birmingham for 15 cents a trip.

At age 10, he worked as a local paperboy making $7 a week. He continued this route until he was old enough to be hired at the local Winn-Dixie bagging groceries.

In 1967, Mr. Stanley Virciglio saw Metcalf bagging groceries at Winn-Dixie and offered him a job at the Western Highlands.

Through the 50 years working at Western, Darwin has been a night manager, produce manager, assistant store manager, store manager, director of operations and executive vice president.

Early in his career with Western he set a goal for himself to be president. In 2007, that goal was achieved when he was named President/Chief Operating Officer.

Metcalf joined the Alabama Grocers Association Board of Directors in 1998, served as Chairman in 2003 and won the Retailer of the Year award in 2004.

“Coming from an organization I love and admire makes this very special. The group of retailers nominated are a very special group and I am humbled and honored to be considered among them.” Metcalf said.

Wholesaler of the Year

Wholesaler of the Year is Delma Craft of Piggly Wiggly Alabama Distributing Company.

Craft, of Chelsea, started in the grocery business in 1978 at Piggly Wiggly Southern in Vidalia, Georgia as a produce selector and loading trucks for delivery. In 1988, Piggly Wiggly Vidalia was sold to RFS out of California and ran the operation until Bruno’s Supermarkets of Birmingham bought the warehouse in 1990.

In 1994, Craft was relocated to Birmingham, Alabama where he was a buyer and category manager for Bruno’s.

Craft went to work for Piggly Wiggly Alabama Distributing Company in September of 1998 as a grocery buyer. He worked through the ranks to his current position of Vice President & Director of Procurement. He also buys commodities and works with the Piggly Wiggly operators on a daily basis.

Craft learned his dedicated work ethic from his father. He always told him no matter what, do what you say you are going to do, show up and give it all you got.

Growing up in Lyons, Georgia on his grandparent’s farm gave him a great insight to a hard day’s work and he has taken these life lessons to heart. Over the years he has earned the respect from the co-ops and his co-workers.

His knowledge of grocery procurement and his experience has made him a great ambassador for the Piggly Wiggly Alabama Distributing Company and the grocery industry.

When asked what winning this award means to him, Delma said: “It tells me a lot of independent operator respect the job the employees are doing at PWADC.”

“We are honored to have so many amazing people in the grocery industry that care about their customers and the communities they serve. The three individuals we honored today all have a high standard and level of commitment to their companies and the people of Alabama,” said Frank D’Amico III of BTC Wholesale and Chairman of the Alabama Grocers Association. “I congratulate each of them on receiving the Associations highest honor.”