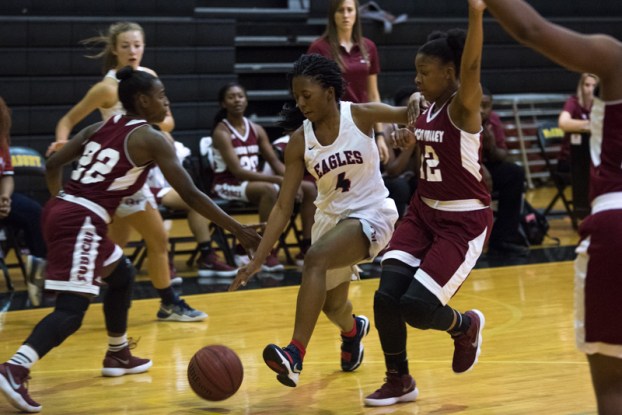 Oak Mountain's Kailey Rory started off her junior season in a strong way, posting 21 points to lead the Eagles to a 58-43 win over Pinson Valley. (Reporter photo/Keith McCoy)

McCalla – Oak Mountain kicked off what is expected to be a strong 2017-18 basketball season for the Lady Eagles with a strong 15-point, 58-43 win over Pinson Valley in the first round of the McAdory Tip-Off Classic on Monday, Nov. 6.

Despite the loss of senior Jacoby Sims, who averaged 12.9 points, 2.6 rebounds and 1.5 assists per game, the Eagles have back both Kailey Rory and Cassady Greenwood.

Rory was an All-County honorable mention on last year’s team and has strong expectations heading into her junior year.

As a sophomore she averaged 8.1 points, 1.8 rebounds and 1.4 assists per game, and opened the season as the go-to player on the team. Rory posted 21 of Oak Mountain’s 58 points in the season opener to help lead the Eagles to a 1-0 start in 2017.

Greenwood also had a strong double-digit scoring performance to kick off her senior year, as her and Rory are expected to be a dynamic-duo this season. Greenwood posted 11 points in her first game of the season as she and Rory combined for 32 of the team’s 58 points.

Behind those two, senior Kennedy Smith and junior Emily Cruce had nine and eight points, respectively, to pace the Eagles with a deep scoring attack.

Oak Mountain outscored Pinson Valley by at least three in all but the fourth quarter and it started in the first with its best frame of play the entire game.

The Eagles jumped out to an early nine-point 16-7 lead behind some quick play in the first quarter.

It sparked Oak Mountain’s offense and in the second quarter, the Eagles ended up scoring their most of any quarter in the game as the two teams combined for an offensive explosion of 33 points.

Oak Mountain was again the team on top, however, as the Eagles outpaced the Indians 18-15 in the quarter to extend their lead to 34-22 heading into the halftime break.

The Eagles came out of the break and posted their third straight double-digit scoring effort in the third quarter, outscoring Pinson Valley 12-8 to take a commanding 46-30 lead into the fourth.

The Indians posted their best quarter of the game in the final quarter, but only outscored Oak Mountain 13-12, which led to the final score of 58-43 in favor of the Eagles.

Kaitlyn Ambrose and Courtney Whatley both ended the night in double digits scoring for Pinson Valley. Ambrose ended with 11 points to lead the way, while Whatley added 10 points. Jamaiya Mintze was the Indians’ third leading scorer with eight points.

Rory’s 21 for Oak Mountain ended up being a game-high as she started the season on a high note.

The Eagles will take on Vestavia on Wednesday at 6 p.m. in the second round of the tournament at McAdory.