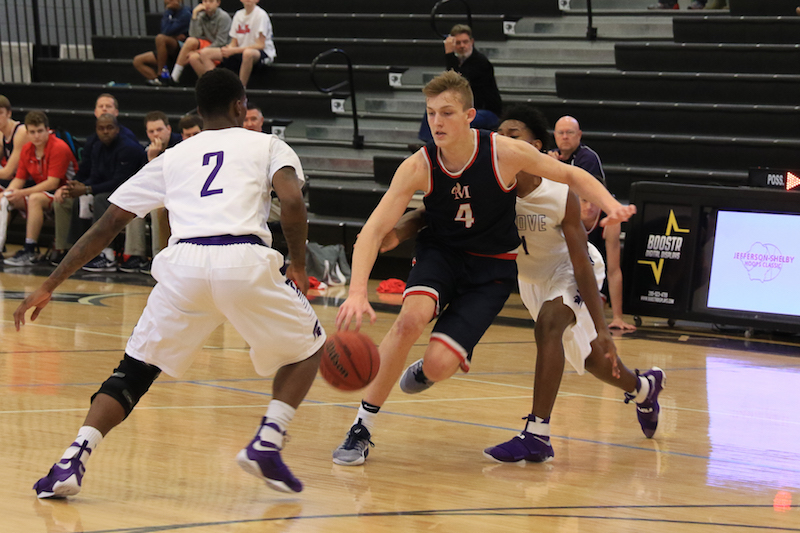 Josh Pierce will be one of the returning leaders to an Oak Mountain team that has plenty of depth at guard and in the post. (File)

Last year, the Oak Mountain basketball team started the season 13-6, but after a win over Grissom in their Christmas tournament (the Zaxby’s Invitational) on Dec. 22, 2016, the Eagles went on to finish the season 1-9 the rest of the way.

This year the Eagles lose their leading scorer in Will Stephenson, who averaged 13.2 points and 2.2 rebounds per game, but return the most depth and size the team has had in a while.

“I really like the makeup of the team this year,” head coach Chris Love said. “It’s exciting that I think this group coming back didn’t like the way things ended last season. We’ve probably had our toughest summer and offseason because of it.”

While there is promise, Stephenson was an All-County third team honoree and the floor general as a three-year starter at the point guard position, which makes him hard to replace.

“He’s probably one of the best point guards to come through here,” Love said. “Losing him is going to be big. Then we had a lot of other role guys that gave us tough points and rebounds and minutes.”

That being said, what remains intact for the 2017-18 squad is a lot more exciting than dwelling on what has departed.

Oak Mountain returns three guys at 6-foot-5 or taller, which may be the most in school history, and several guys that logged valuable minutes during the 2016-17 season.

It starts with guard/forward Chris Mayweather, who as a sophomore last year showed as much upside as any player in the county. He was already strong, but now has a 6-foot-3 frame after sprouting up in the offseason.

He’ll be a guy that can score a lot of points and can get into the paint when need be, especially if the Eagles run their smaller lineup.

That smaller lineup might consist of guards like junior point guard Drew Dunn, who was brought up from the junior varsity midway through last year because of his skillset.

Oak Mountain also has guards in Zach Nelson, a standout on the football team this season, Turner Youngblood, Blake Hollingsworth and Luke Jasinski that have had nice summers and Love feels confident in.

“Those guys can give us some big minutes and we won’t lose anything,” Love said. “Coming out of summer we were a little worried about our depth, but we actually feel really good about things right now.”

As exciting as the guard play looks to be, it’s the amount of size and height the Eagles have this season that makes them a scary team.

It starts with Carson Bobo, one of the football team’s best offensive playmakers during 2017. Bobo stands at 6-foot-5, 205 pounds and can play center or forward.

That’s just the beginning of the big guys. Josh Pierce, who was an honorable mention guy on last year’s All-County team will return as a starter to anchor the post. The senior stands at 6-foot-7, 210 pounds, and already has an offer from Birmingham Southern.

Christian Stockdill, a true center, stands at 6-foot-8, 205 pounds, and has really impressed Love heading into his senior season. Nathan Jones is another guy that can play guard or forward, but adds height at 6-foot-4.

“We’ll probably try to be more inside out than we were last year,” Love said due to the excitement of size in the lineup. “We have some good post guys that we’ll want to get the ball down low to. Defensively we will probably more zone than we typically do for that same reason.”

It’s a lineup that Love thinks is suited well to compete against one of the toughest areas that features one of the best teams in the state in Mountain Brook, as well as Hoover, Huffman and Spain Park.

“Our expectation is to compete for the area championship,” Love said. “I think we can go out and compete with this group. They’re not going to back down from anybody.”

It’ll be a tall task, but the Eagles have a strong chance to be one of the two best teams in the area thanks to their balance of guards and size in the post.

Oak Mountain will open the season on the road against the Pelham Panthers on Thursday, Nov. 16.