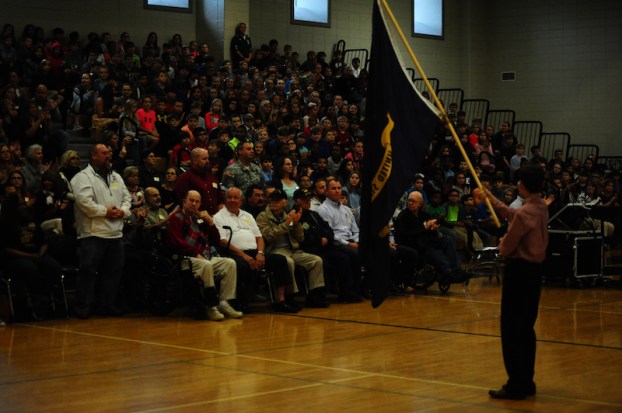 An HMS student holds a military flag during a Veterans Day assembly at the school on Nov. 8. (Reporter Photo/Graham Brooks)

HELENA–The Helena Middle School gymnasium was packed the morning of Wednesday, Nov. 8, as students, faculty and family members gathered to honor and celebrate local Helena veterans from each branch of the military at a special program the school hosts on an annual basis.

Veterans Day is officially observed on Nov. 11, but HMS held the assembly a few days prior due to the day falling on a Saturday this year.

The student-led assembly featured poems and essays being read on what it means to be a hero, several songs played by the HMS band and choir, a special introduction and recognition of veterans and more.

“An FBI agent once told me that ‘Integrity is doing the right thing when no one is watching,’ and true heroes have integrity,” One HMS student read. “I firmly believe that a hero is someone who does that.”

The highlight of the assembly came when students read facts and figures about each branch of the United States Armed Forces while a flag representing each branch was walked out and put on display.

The Marine Corps, Army, Coast Guard, Air Force and Navy were all recognized and after each flag was displayed at mid-court, the HMS band played the song of each branch and each veteran of the particular branch stood to be recognized.

After the recognition, HMS students presented each veteran with a certificate and an essay as a token of appreciation.

The assembly concluded with the playing of a special video titled, “I fought for you” and a PowerPoint presentation was shown depicting each veteran, years they served, branch and awards they may have received.

Helena resident Jay Gortney has served in the United States Army since 1992 and attended the assembly for the first time. Jay’s son, Connor Gortney, is an eighth grader at HMS and plays in the band. Jay serves in the Alabama National Guard 20th Special Forces.

“I thought it was really good and I enjoyed it. It was nice to see them do it,” Jay said. ““The slideshow was pretty neat just seeing all the other veterans and seeing the World War II veterans.”

Helena Middle School showed one last gesture to veterans by hosting a reception in the HMS cafeteria with cake and refreshments.

HIS celebrates ‘Parenting Day’ on Halloween

By GRAHAM BROOKS / Staff Writer HELENA–Halloween was an eventful day for students and their family members at Helena Intermediate... read more