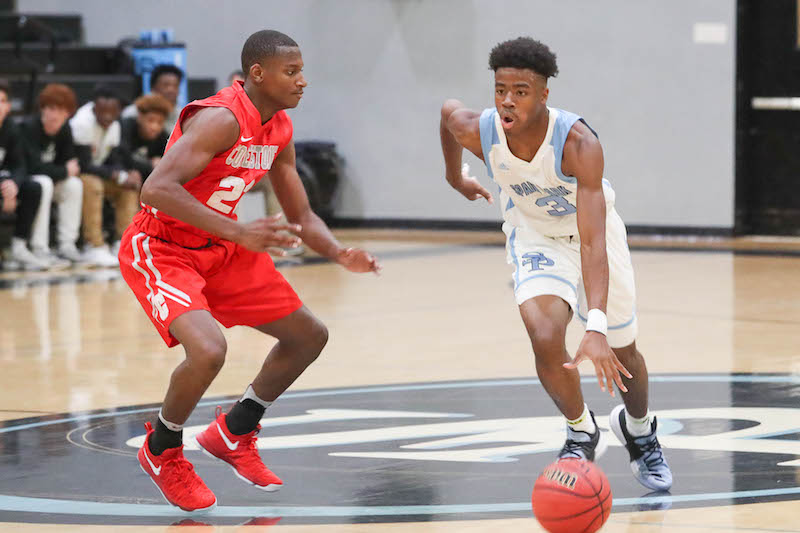 Spain Park was led by DayQuan Williams with 19 points in the Jags' first game of the 2017-18 season. (For the Reporter/Dawn Harrison)

HOOVER – Spain Park opened a new era on Tuesday, Nov. 7, when the Jaguars’ 2017-18 basketball team took to its home court for the opening game of the season against the Cornerstone Eagles.

It marked the first time since … that neither Jamal Johnson or Austin Wiley donned the Spain Park blue and black, meaning Spain Park was having to adjust things with their tallest player standing at 6-foot-3 and their leading scorer in Johnson from a year ago now at the University of Memphis.

It just means Spain Park will have to have a more balanced effort this season and that’s just what they got as four players scored in double figures to lead the Jaguars to a 70-57 win over the Eagles.

Despite the final score, Cornerstone started the game strong on a 7-2 run, but at the same time picked up three quick fouls. The early foul trouble allowed Spain Park to battle back to tie the game at 7-7 after Cornerstone picked up five total fouls in the first 2:16 of play.

The Eagles followed with a 4-0 run thanks to some sloppy play and mistakes by the Jags, but head coach Don Quin got his guys refocused.

After Parker Boswell knocked own his first shot from beyond the arc in the game, it seemed to spark the Jaguars. Cornerstone picked up three more fouls, which allowed Spain Park to get several easy baskets on its way to a 13-1 run to end the opening quarter as they snatched a 20-12 lead. 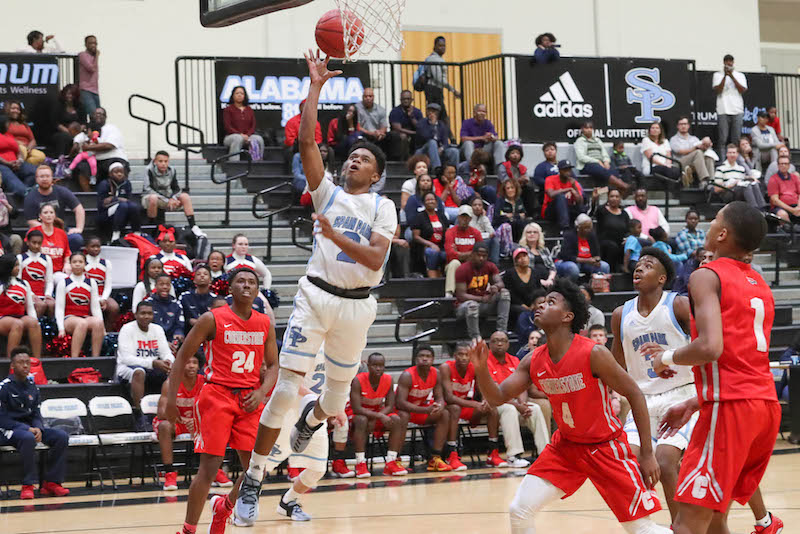 Parker Boswell also had a nice game with 11 points. He was one of four players in double figures. (For the Reporter/Dawn Harrison)

The run was sparked by a combined four technical free throws for Spain Park and steal that eventually led to a Boswell behind the back pass to a streaking William Blalock for an easy layup.

The Jags extended the lead to 10 with the first basket of the second period, but a Cornerstone 3-pointer shortly after cut it to seven. That’s as close as the Eagles got the rest of the quarter, however.

Spain Park held around an 11-point lead the entire quarter and led by as many as 12, before taking a 10-point, 36-26 lead into the half. The two teams combined for 15 first-half fouls, 10 of which came from Cornerstone.

The two teams came out and played much cleaner basketball with an up-and-down pace that featured just five combined fouls in the third quarter. It led 29 combined points between the two, but 19 of those points came from the Jaguars as they extended their lead to 55-36 heading to the final frame.

Cornerstone wasn’t ready to just fold and came out strong to start the fourth quarter. The Eagles outscored Spain Park 9-2 in the first two minutes of the period thanks to a full-court press that forced several turnovers and easy baskets.

The Cornerstone defense help cut Spain Park’s lead to 57-45. Spain Park answered back with a run of its own, however, outscoring the Eagles 10-2 over the next three minutes to take an 18-point 65-47 lead.

The Eagles clawed back within 11, but didn’t get any closer as the Jaguars preserved a 70-57 win to improve to 1-0 on the season.

Spain Park was led by DayQuan Williams with 19 points in the game, while Trey Johnson added 12 points and Boswell 11 points. Blalock also added 10 points to give the Jags four double-digit scorers.