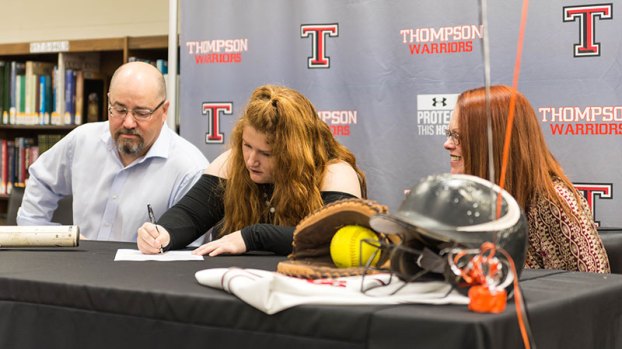 “We’re really excited about having Madison, and she’s going to fit us well,” Benson said during THS senior softball player Madison Bubel’s scholarship signing ceremony in the THS library on Nov. 8. “We lose four seniors, and we don’t have very much in catching right now. We’re very proud to have her. We’re building our program off of people like this.”

Bubel was the second THS softball player to sign a college scholarship offer in as many days, as her teammate Bailey Whitfield inked with Faulkner University the previous day.

During the ceremony, Bubel was surrounded by family members, teammates, coaches and school administrators.

THS softball coach Kevin Todd said Bubel’s catching prowess has led to much success during her time with the Warriors.

“I’m so proud and really happy that she chose Marion. One reason is because of Jeff Benson – He and I go way back, and we’ve been friends for years,” Todd added. “I was really excited when she said she was going to Marion, because Jeff knows how to develop catchers. She’s going to be in good hands.”

In addition to her standout catching skills, Bubel is also making an impact at the plate. Last season, she held a strong batting average of .455 with 39 RBIs. She picked up 49 hits including 12 doubles and five home runs en route to earning a spot on the Shelby County Reporter All-County list last year.

“I want to tell everyone how proud we are of Madison. This is her day,” Todd said.