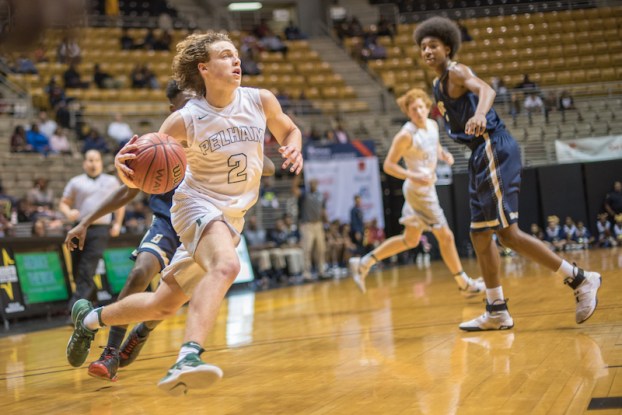 Pelham's Justin Allison will be one of the best returning players in the county and will look to lead the Panthers back to the Elite 8 of the state tournament this season. (File)

Normally when a high school basketball team loses a player that averaged 21 points, 10 rebounds and 1.5 blocks per game to an SEC program, that team would lose the majority of its offensive production.

While that’s the case for the Pelham Panthers in 2017 thanks to the departure of center Alex Reese to the University of Alabama, but the blow to that production will be less significant than most years thanks to the return to fellow All-County first team player Justin Allison.

Reese was last year’s Player of the Year in Shelby County, but Allison was right on his heels for consideration of the honor. The two players combined to help lead the Panthers to an unbelievable run all the way to the Elite 8 of the state tournament.

“Certainly whenever you lose an SEC-type player like Alex Reese and then some really good pieces to the puzzle like Seth Torman and Elijah Hudson,” Floyd said. “We lost a lot so we’re a tad inexperienced when it comes to the varsity level.”

That inexperience will feature just three guys on the 2017-18 Pelham basketball team with varsity playing experience. Several of those will be juniors this season.

Allison will obviously be the leader of the group as one of two seniors, having two years of starting experience under his belt; and now that Reese is gone, it’s his show to run.

He’ll bring back 19 points, 4.5 rebounds and four assists per game. Last year, when Reese went out with a knee issue, Allison flashed signs of brilliance, scoring 25-plus points on several occasions.

“He works as hard as anybody I’ve ever had before,” Floyd said. “That creates a certain culture and them around everything we do. Everything we do, he’s giving his best effort. That creates the culture that we need.”

Floyd does know that teams will key on him defensively, but says several guys are ready to step up this season and make a name for themselves.

Chris Brown, Mason Goolsby and Edward Gipson are three of those guys ready to take charge. Brown and Goolsby (the other senior) both bring back some varsity experience, while Gipson will be one of the more athletic players on the floor this year.

“Gipson coming off the football field is a very big deal for us,” Floyd said of the junior. “He’s just a special athlete.”

Floyd also added that it goes behind those three with several role players waiting in the wings to step up, especially early in the season as football players get worked into the lineup.

“That’s something this year that will be a little different,” Floyd said. “Last year it was just Justin and Alex, this year other than Justin being that main go-to guy, you’re going to have a different guy step up every night.”

Floyd said he’s excited for the unknown and to see who can step up early in the season to make some big plays.

Pelham will open the season on Monday, Nov. 13, at Hueytown before turning around to host Oak Mountain in the Panthers’ first home game on Thursday, Oct. 16.