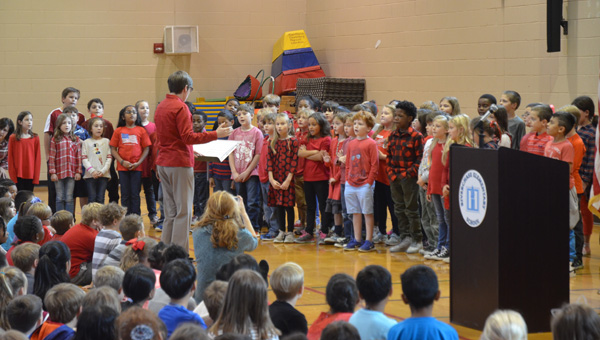 HOOVER – Riverchase Elementary School students heard from the chairman of the Hoover Veterans Committee at the school’s Veterans Day program on Thursday, Nov. 9.

Brigadier Gen. Paul Pocopanni talked to the first through fifth grade students in the school gymnasium about his experience in the armed forces and the importance of recognizing veterans.

“Veterans Day should be every day and not just one day a year for what they have done to keep us free,” Pocopanni said and encouraged the students to reach out to veterans and thank them for their service. “That means a lot, and it starts with you parents.”

The program began with the Pledge of Allegiance, which was led by Boy Scouts Pack 367.

Then the school’s third grade singers performed two songs, including “Thank a Vet.”

“Veterans Day is the time we celebrate all the people who have fought for freedom in our country,” Turner said.

Pocopanni read the poem, “It Is the Veteran,” and a quote from former president Ronald Reagan: “Freedom is never more than one generation away from extinction. We didn’t pass it on to our children in the bloodstream. It must be fought for, protected, and handed on for them to do the same, or one day we will spend our sunset years telling our children and our children’s children what it was once like in the United States where men were free.”

At the end of his speech, Pocopanni took questions from students, including one about whether he was scared during his service.

“I’ve been in some scary situations before, but I knew what I was up against,” Pocopanni said.

He said earlier that he was grateful for his service.

“It was one of the best things I’ve ever done in my life,” Pocopanni said.