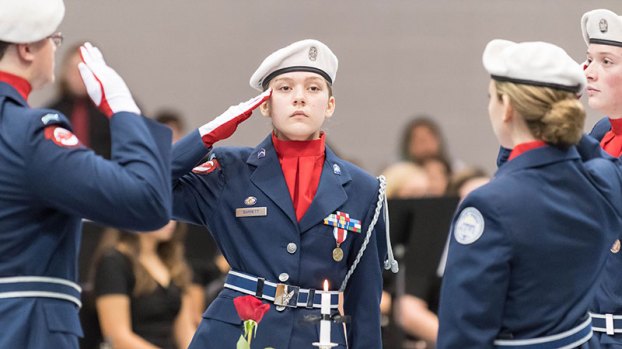 ALABASTER – The thousands of students packed into the Thompson High School gymnasium were completely silent as cadets of the school’s Air Force Junior ROTC slowly raised their hands to salute while surrounding an empty table draped in a white tablecloth.

After saluting the table, which displayed several items signifying those who have paid the ultimate price while serving in the nation’s military over the years, the cadets slowly and solemnly marched to the back of the room, all while the gym remained quiet.

The prisoner of war/missing in action remembrance table served as the highlight of the school’s annual Veterans Day ceremony, which is a highlight in the community each year and is organized by the Junior ROTC.

For the ceremony, local veterans and their families were invited to attend and be honored, including 96-year-old Clarence South, who was a ball-gunner on a B-17 aircraft in World War II.

“This is the largest crowd we’ve had in the five years I’ve been here,” said retired U.S. Air Force Lt. Col. Douglas Crabb, who leads the Junior ROTC program at THS. “Our veterans have made many sacrifices in service to our nation, but they have not served alone. Right beside them are family members who have stood with them.

“Through the generations, citizens have been given freedom thanks to the sacrifices of our veterans. Millions of America’s finest have selflessly answered the call of duty, and those are the ones we honor today,” Crabb added. “We owe a great debt of gratitude to these brave men and women. May God bless them, and may God bless the United States of America.”

“As a citizen of our country, I am humbled to stand before you today,” Brinkerhoff said. “It is because of their efforts and sacrifices that we are able to enjoy the freedoms we do today.”