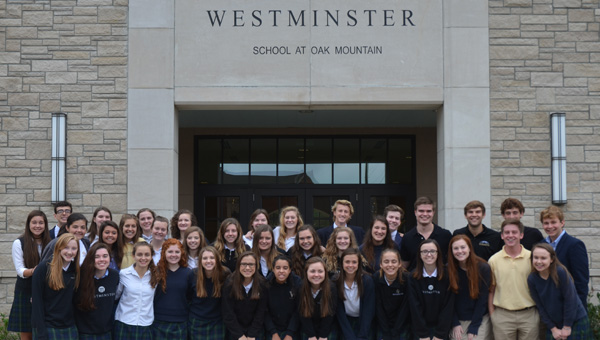 NORTH SHELBY – Members of the National Honor Society at Westminster School at Oak Mountain were recognized during a ceremony on Wednesday, Nov. 8.

39 standing and new members of the exclusive organization were honored in front of their classmates and parents in the atrium of Westminster’s Upper School.

Acceptance into the National Honor Society requires an unweighted GPA of at least 3.50 for juniors and seniors, and faculty endorsement based on service, leadership and integrity.

“They are those who have thought of others and not just themselves,” Herring said and encouraged all Westminster Upper School students to aspire to joining the society themselves.

Also recognized was Westminster student Rachel Faulk, who has been named a National Merit semifinalist.

Only about 1 percent of 1.6 million Merit applicants are named to the semifinalist level, Herring said.

Herring said that while honoring the students “recognizes the fruit of God’s calling in our lives,” it is important for them to avoid a “swollen sense of self.”

“The greatest temptation we face on a daily basis is, ‘I got this,’” he said.

ALABASTER – During the week before Veterans Day, students in preschool through the third grade at Creek View and Meadow... read more