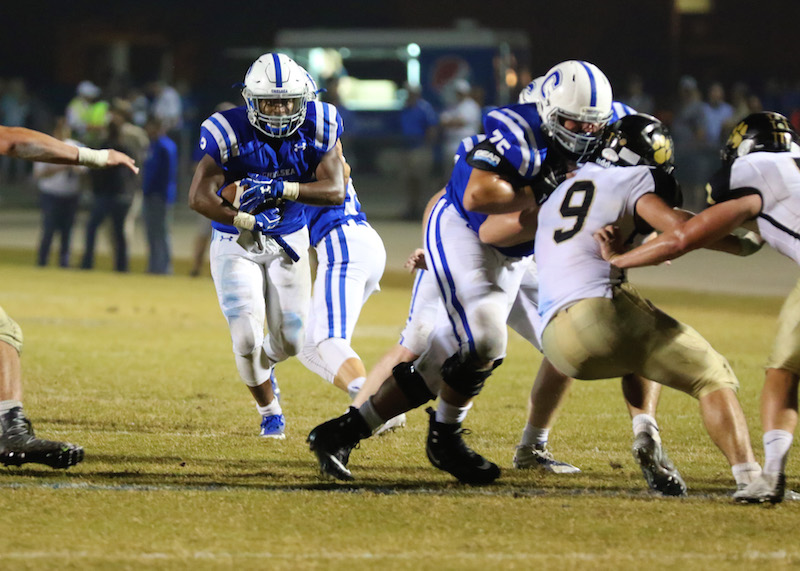 Chelsea's Hope Richard backs down the Vestavia defender in the Hornets' first game of the season. (For the Reporter/Adam Lee)

VESTAVIA – In year one, Chelsea girls’ basketball head coach Lori Weber led the Lady Hornets to a winning record of 16-14, and with most of her team back for the 2017-18 season including leading scorer Michaella Edwards.

The start to that exciting season came at Vestavia on Thursday, Nov. 9, when the Hornets traveled to take on the Rebels. It wasn’t the start Chelsea had hoped for against one of the better 7A girls teams as they fell 54-34 to start the season.

Chelsea actually started the game strong with returning players like Edwards, Jordan Parker and Hope Richard all back and expected to have strong seasons.

It led to a battle in the first quarter as the Hornets played their closest 8:00 of the game and trailed by just one point, 15-14, at the end of the opening period.

Vestavia used 10 combined points from Josie Edwards and Emma Smith in the second quarter, however, and the defense stepped up to hold Chelsea to just seven points. The Rebels ended up taking a 27-21 lead into the half.

Coming out of the break, the Hornets had their worst quarter of play, while Vestavia had its best. The Rebels put up 15 more points to match their opening quarter mark, while limiting Chelsea to a quarter-low of just six points.

Smith had seven more points in the quarter for Vestavia as the rebels extended their lead to 42-27 heading into the fourth quarter.

Vestavia kept up the pressure in the final frame outscoring Chelsea for the fourth consecutive period, this time 12-7, as they went on to win the game by a final of 54-34.

Chelsea fell to 0-1 on the season and will take on Gardendale on Tuesday Nov. 14, in the Hornets’ home opener and then will host Tuscaloosa County on Friday, Nov. 17.

Smith led the Rebels with 19 points in the game as they improved to 1-0 on the season.