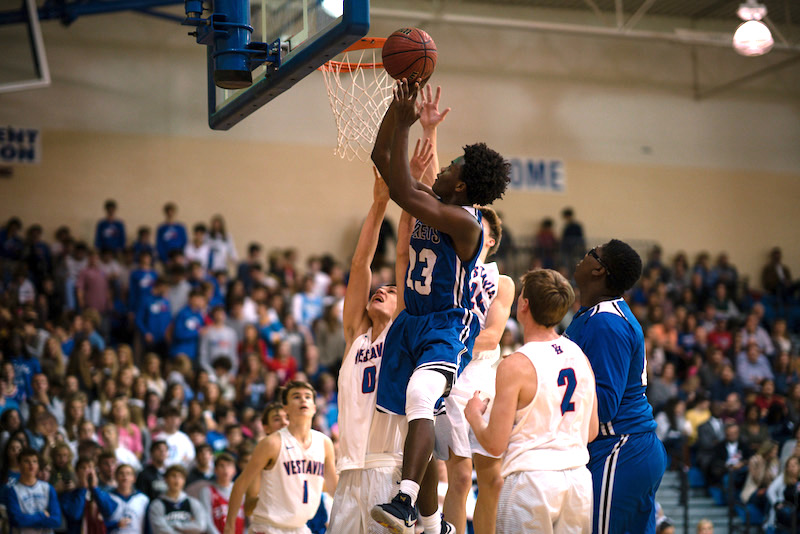 In a balanced scoring attack, Chelsea's Tyler Coleman tied for the team lead with nine points in the Hornets' opening-night loss. (For the Reporter/Adam Lee)

VESTAVIA – Chelsea opened up the post Joseph Lanzi era on Thursday, Nov. 9, on the road at Vestavia Hills High School, where a tough battle saw the Hornets lose their opener by 13 points, 62-49, to fall to 0-1 on the season.

The Hornets opened the game with buckets from Tyler Coleman and Nyles Macon to take the early advantage at 5-3, but Vestavia answered with a 9-2 scoring run to snatch the lead right back and take a five-point, 12-7advantage.

In a back-and-forth affair, the second quarter might have been the most exciting of the game.

Chelsea and Vestavia both played good defense and neither team could pull away or go on an extended run. The Hornets actually outscored the Rebels 13-11 in the quarter, but Vestavia still held a slight advantage heading into the half with a 25-23 lead.

The halftime break seemed to be a blessing for the Rebels as Chelsea was battling back to end the first half. To start the third quarter, however, it was all Vestavia.

Leading by just three points, the Rebels picked up their half-court defense and caused multiple turnovers and to go on an 8-0 run midway through the third to stretch their lead to 11.  Five different scorers for Vestavia led them to 22 third-quarter points and a 47-36 lead.

In the final frame, Chelsea played even with Vestavia, but was never able to go on a long scoring run to close the gap as the Rebels scored 15 in the final frame to win by the final of 62-49.

According to Chelsea head coach Nick Baumbaugh, a big difference in the game was at the free throw line where Vestavia shot 28-37 from the charity stripe, while Chelsea was 11-25.

Chelsea had a balanced scoring attack with Matthew Lanzi and Tyler Coleman both posting nine points in the contest. Josh Hanna and Michael Gibbs each finished with eight.

Vestavia was led by Scott Morrison and Rian Shields with 14 points apiece as the Rebels improved to 1-0 on the young season.

Chelsea will host its first home game on Tuesday, Nov. 14, against Gardendale.