Girl Scout takes on project to help seniors with dementia

PELHAM – Sophie Reynolds, a Pelham native and freshman at the University of Montevallo, earned the Girl Scout Gold Award for her project, “Sensory for Seniors,” which focused on the lack of care and awareness of seniors with dementia. 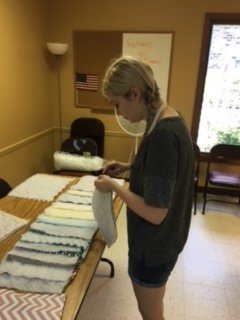 Reynolds works on one of the sensory mats. She educated her community and taught them how to make the mats. Volunteers made 61 mats in one afternoon. (Contributed/Girl Scouts)

The Girl Scout Gold Award, the highest honor a Girl Scout can earn, acknowledges the power behind each recipient’s dedication to not only empowering and bettering herself, but also to making the world a better place for others.

Reynolds’ goal was to educate her local community about dementia by sewing “sensory mats” for local seniors suffering from dementia or Alzheimer’s. These mats have been shown to lift spirits, relieve caregivers, and stimulate the senses and memory, as well as exercising the fingers and hands.

“Several members of my family have been afflicted with Alzheimer’s or dementia, so helping those with these diseases has always been something I’ve been drawn to do,” Reynolds said. “My mother always talked about how her grandmother loved to sit and fold washcloths for hours on end after being diagnosed with Alzheimer’s, so I immediately thought of her, and how sensory mats could help seniors, as well.”

Reynolds raised awareness by creating a Facebook page, pamphlets, and a tutorial on making the sensory mats. She also hosted a volunteer day to teach others how to sew sensory mats and about the symptoms of dementia and Alzheimer’s. Volunteers created 61 mats in one afternoon.

For the sustainability portion of the Gold Award, Reynolds passed the project along to a local crafting group, who has agreed to help get local Girl Scouts troops involved.

“By earning the Girl Scout Gold Award, Reynolds has become a community leader,” said Karen Peterlin, CEO of the Girl Scouts of North-Central Alabama. “Her accomplishments reflect leadership and citizenship skills that set her apart.”

Girl Scouts describes a girl who goes for the Gold Award as someone who embraces challenges, achieves excellence and works diligently to make the world a better place, in her own unique way. Her leadership, vision and boundless energy is an inspiration to all Girl Scouts.

Each girl earning her Gold Award demonstrates excellence through a leadership project totaling more than 65 hours.

Girls who earn a Gold Award are also recognized by the President of the United States, the U.S. Congress, the U.S. Armed Services, state legislatures, colleges and universities for admission and scholarship opportunities and the American Legion. Girl Scouting builds girls of courage, confidence, and character, who make the world a better place.

Some universities and colleges offer scholarships unique to Gold Award recipients, and girls who enlist in the U.S. Armed Forces may receive advanced rank in recognition of their achievements.