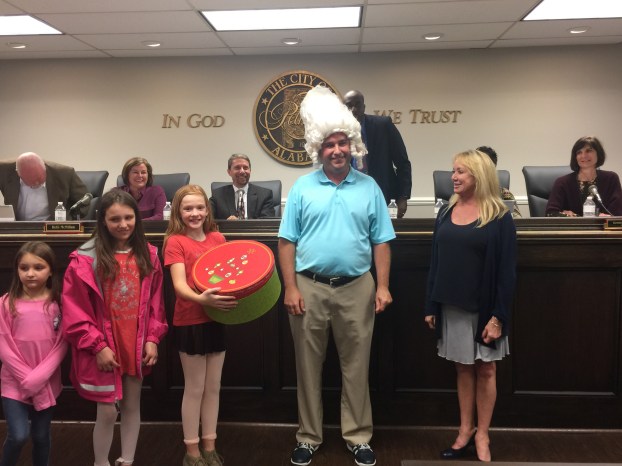 Hal Brown accepts the challenge of playing Mother Ginger in the 2017 production of Grebel Dance's The Nutcracker. (Reporter photo/Briana Harris)

PELHAM – A new Mother Ginger has been chosen. Keeping with a tradition that stretches back to 2005, this year’s Mother Ginger for Grebel Dance’s production of the Nutcracker was chosen during the “Passing of the Wig” ceremony during a Nov. 6 City Council meeting.

During the “Passing of the Wig,” last year’s Mother Ginger, Pelham Civic Center facility administrator Danny Tate, wandered around the City Council chambers holding the more than 2-foot-tall baroque-style Mother Ginger wig – with a handful of young ballerinas in tow – and selected Hal Brown to carry on the tradition.

Brown, general manager of Ballantrae Golf Club, accepted the calling, placing the wig on his head. The infamous wig is a part of the Mother Ginger costume.

As Mother Ginger, Brown will dance onto the Sugar Plum Fairy’s court and open his vast skirt to reveal gingerbread children who will dance around him. Brown said he’s looking forward the playing role.

The role has been played by many notable Pelham residents in past productions of the Nutcracker, including current Mayor Gary Waters, former Mayor Bobby Hayes, councilmen Maurice Mercer and Ron Scott, Police Chief Larry Palmer and many more.

Tickets range in price from $5 to $15. To purchase tickets, go to Tututix.com/client/grebeldance/.

Girl Scout takes on project to help seniors with dementia

FROM STAFF REPORTS PELHAM – Sophie Reynolds, a Pelham native and freshman at the University of Montevallo, earned the Girl Scout... read more