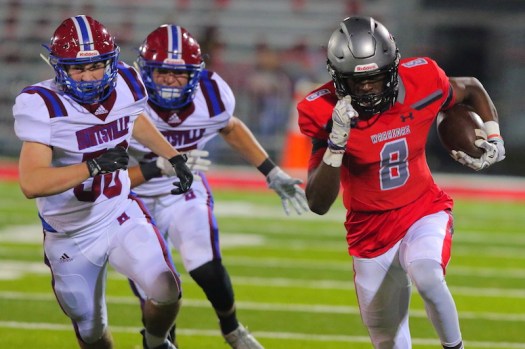 Thompson's Mo Edwards runs up field after catching a quick bubble screen. He took the pass and went 57 yards to the house in the first quarter. (For the Reporter/Eric Starling) 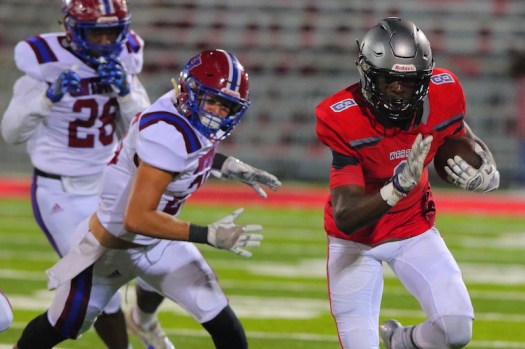 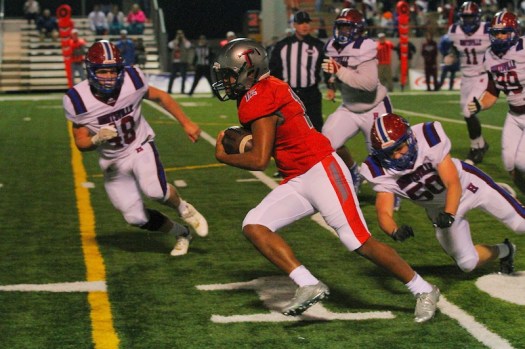 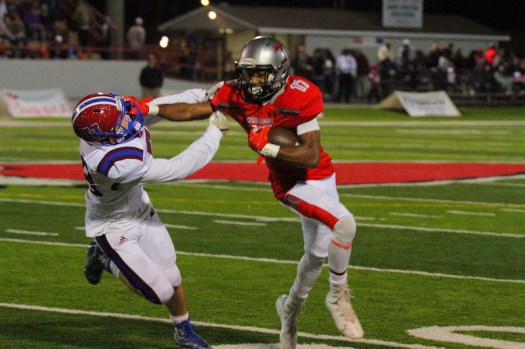 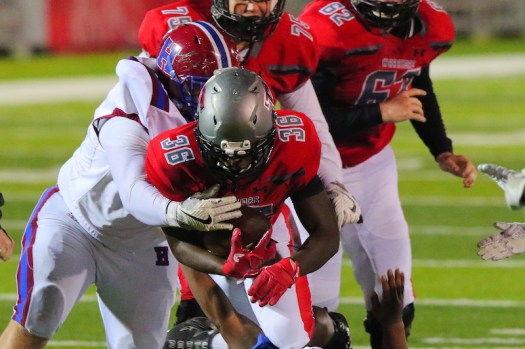 The lights weren’t too bright after the decade-long draught as Thompson came out and made a statement in its opening-round game thanks to a 35-0 shutout of the Huntsville Panthers in front of a home crowd at Larry Simmons Stadium.

“I asked the kids yesterday how many had ever been to a playoff game in their life,” Thompson head coach Mark Freeman said. “About half of the players on the team had never been to any kind of playoff event, as a player or a spectator. I’m just proud of them right now.”

Despite having one of the best seasons in program history, on both sides of the ball, the shutout was the first of the season for a Thompson defense that was giving up just 18.1 points per game coming into the matchup.

As impressive as the offense was scoring 35 points with ease, it was the defense that stuck out for the head coach.

“Anytime you throw a shutout in the playoffs, I don’t care what round it is, that’s impressive,” Freeman said. “I’m proud of the coaches for getting the defense ready like that. When the defense is playing that good we’re tough. Our big thing is we have to get off the field on third down. With the exception of one or two times we got off the field.”

The defense was able to relax and play its game in large part because an offense that came into the game averaging 41.5 points per game continued to shine.

It started on the opening drive when the Warriors went nine plays in 2:11 to take a 7-0 lead. The drive featured a balanced five passes and four runs before Shad Byrd rumbled 11 yards into the end zone for the opening touchdown.

While Thompson’s offense was firing on all cylinders for the most part, there were a couple of missed opportunities. The first came on Thompson’s second drive.

After JoJo Ford picked up a 59-yard run to kick start the drive and put Thompson inside the 10-yard line, the Warriors failed to convert after a bobbled snap on the field goal attempt four plays later led to no points.

Thompson didn’t dwell on it at all, however, and on its third drive of the game, Mo Edwards took a 57-yard wide receiver bubble screen all the way up the far sideline for Thompson’s second touchdown of the game and a 14-0 lead with 2:41 left in the first quarter.

The Warriors posted two more touchdowns in the first half, one an 11-yard swing pass to Ahmad Edwards and the other a 20-yard fade to the back corner of the end zone to Mo Edwards.

Thompson’s last touchdown of the night came with 2:01 left in the third quarter when Ford ran in a 14-yard score to create the final of 35-0.

Tagovailoa had another solid night at the quarterback position with 394 yards and three touchdowns through the air, while also escaping on several runs. Mo Edwards had eight receptions for 151 yards and two touchdowns, while Ahmad Edwards continued his historic season with 15 receptions—seven of which came on the first two drives of the second half.

Running backs Ford and Byrd combined for more than 150 rushing yards and two scores as well.

It was a sight for sore eyes after Thompson almost lost its regular-season finale to Hillcrest, something Freeman said may have sparked a strong week.

“They’re resilient and they want to learn,” Freeman said. “It definitely helped us have a better week of practice and more focus tonight. There were a lot of factors in that game against Hillcrest and it was one of those weird weeks.”

The Warriors will play host to fellow Class 7A, Region 3 foe the Mountain Brook Spartans in the second round on Friday, Nov. 17, for the second time this season. Thompson won the regular-season matchup back on Sept. 15, 40-13.