‘I love my country:’ Veterans spotlighted during Alabaster ceremony 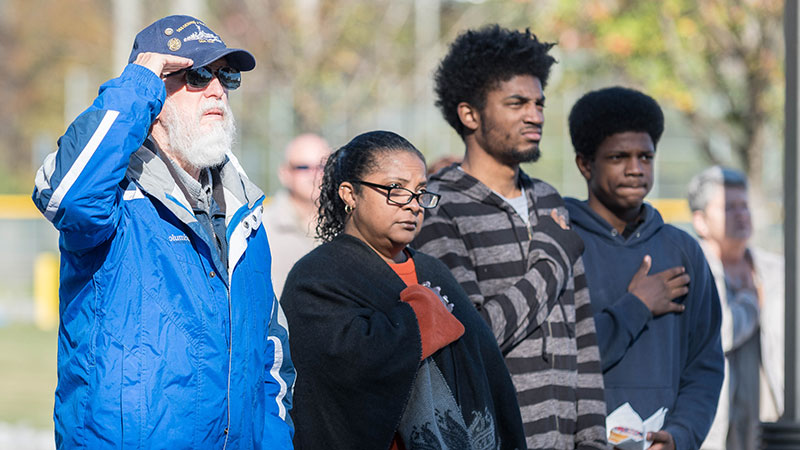 Veterans and their family members salute and place their hands over their hearts while Jennifer Matthews sings the national anthem at the Alabaster Veterans Day ceremony at Veterans Park on Nov. 10. (Reporter Photo/Neal Wagner)

ALABASTER – Vietnam War veteran and Alabaster resident Ron Jefferson has a simple message for his fellow veterans: Don’t be afraid to share your stories.

Jefferson was the featured speaker during the city’s second-annual Veterans Day ceremony at the park, which drew about 40 people to the park’s veterans memorial.

Jefferson is the founder of the Last Man Standing Foundation, and is the last known living Vietnam veteran to have served five consecutive tours in the war.

At age 17 Jefferson entered the U.S. Navy in 1962 as a cook and was honorably discharged in 1974 as a Green Beret in the U.S. Army, rank Master Sergeant.

He earned many medals during his years of service including the Purple Heart and Cross of Gallantry.

In addition to his advice to veterans, Jefferson also shared some words of wisdom to the younger generation.

“Young people have a misinterpretation of heroes. I’m not a hero. I’m a warrior, but I’m not a hero,” Jefferson said. “I did what I did because I wanted to. We all took that oath, and nobody made us do it.

“But you do have an obligation to the people who put their lives on the line for you,” Jefferson added. “I served for you, because when I get old, you’re going to take care of me. I love my veterans, I love my young people and I love my country.”

The ceremony featured an invocation by First United Methodist Church of Alabaster Executive Pastor Arthur Harrison, the singing of the national anthem by Jennifer Matthews from Cultivate Church and a flag retirement ceremony and the Pledge of Allegiance by Boy Scout Troop 548.

“We are able to determine our quality of life at a local government level because of the sacrifices our veterans made,” said Alabaster Mayor Marty Handlon. “It seems we have so much to be thankful for, but it doesn’t really resonate with us until something like 9/11 happens.

“That really brought home to us how blessed we are, and it’s given us a greater appreciation to those who defend those freedoms.”