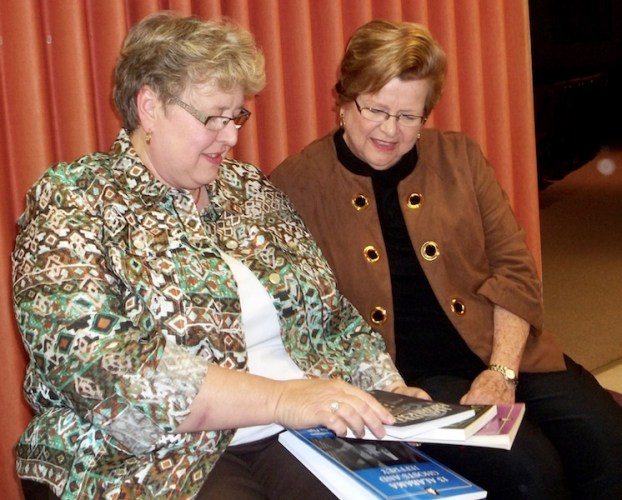 Just a week before Halloween this year, an ordinarily sedate group of Montevallo women decided to scare the dickens out of themselves.

Betty Walker made it her task to provide the inspiration. As the presenter for October, Walker reported to the Montevallo Study Club on “Notable Alabama Hauntings.”

Particularly gripping was her account of the “Dead Children’s Playground,” a site where paranormal investigators say they have collected significant evidence of other-worldly phenomena. “It is said that a visitor at night can hear the sounds of children laughing and playing,” Walker said.

The playground is within Maple Hill Cemetery in Huntsville which might seem a rather macabre site for swings and slides. Walker said that investigators have reported “witnessing a swing moving by itself, as well as hearing the disembodied voices of children singing, playing, and even calling out to them.”

Of course, she noted, by definition one would almost expect ghosts to hang around cemeteries, but some of Alabama’s haunted sites seem less likely candidates.

“I found that there are a lot of ‘Crybaby Bridges’ in Alabama,” Walker said. This surprised some of her audience. Former Montevallo Mayor Sharon Anderson said that she was acquainted with what she previously had thought to be the only “Crybaby Bridge,” not far from Montevallo.

Anderson said that her husband, Richard, “took some of the young people from our church out there, and they heard a baby crying.” Most of the bridges derive their nickname from tales of drowned babies, particularly of mothers’ throwing infants off the bridges to drown in the water below.

By no means are crying babies the only ghostly figures hanging around bridges in Alabama. Walker raised the fright meter several notches with her account of Hell’s Gate Bridge near Oxford.

The old bridge on Boiling Springs Road “earned its unusual and spooky name like this: Legend says if you stop on the bridge and turn around, the road behind you resembles the fiery gates of Hell,” Walker said. Her research cited an investigation by the Oxford Paranormal Society that concluded the bridge indeed is haunted.

Long ago a young couple died in an accident on the bridge, Walker said. “And, on a dark night, if you stop on the bridge and turn off all your lights, one of them will get into the vehicle, leaving a wet spot on the seat,” she said.

Of course, this group is the “Montevallo” Study Club, so Walker wound up her report by reminding the audience of the many ghostly citizens the city can claim.

This last one is the story of Condie Cunningham who was heating chocolate using what today is known as “Sterno.” The container of burning fuel spilled onto Cunningham’s nightgown. Two days later, Cunningham died in a hospital from burns. Since 1909 students have seen Condie’s ghostly face on a dorm room’s door.

By NANCY WILSTACH / Community Columnist Heading north on the curves of Salem Road, before you get to Shelby 22... read more