Pelham’s season ends in first round 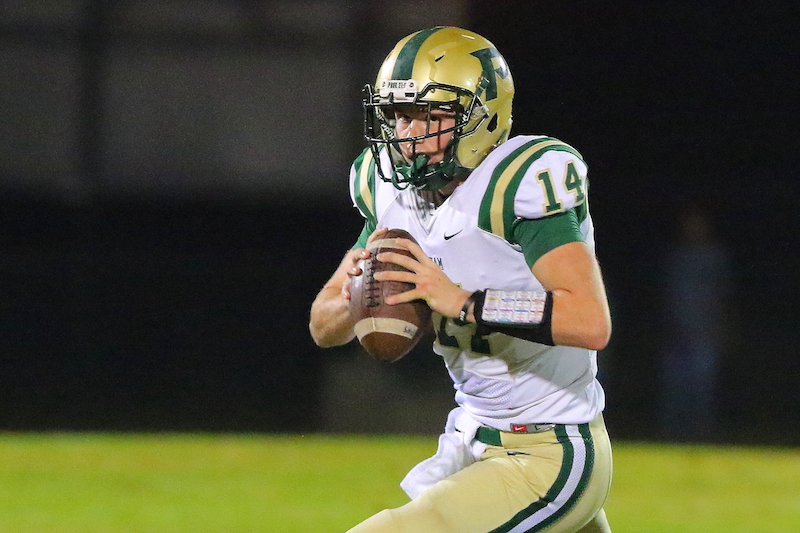 Pelham saw its 2017 football season come to an end in the first round of the playoffs at Spanish Fort. The Panthers won two more games, five, this year than they did the last two years combined, three. (For the Reporter/Eric Starling)

SPANISH FORT – Pelham’s first AHSAA Class 6A playoff appearance since 2013 came to an end in the first round Nov. 10 on the road with a 49-14 loss to fourth-ranked Spanish Fort.

The loss ends Pelham’s season with a 5-6 record. Spanish Fort (10-1) extends its win streak to 10 games to advance past the first round of the playoffs for the 10th straight season, the last four years in Class 6A. The Toros will meet Sidney Lanier in the second round Nov. 17.

“We knew it was going to be an uphill battle. We talked to our kids all week long. We didn’t try to sugar coat it. Spanish Fort came out ready to play. There was no let down at all. I think the speed of the game got to us early,” Pelham head coach Tom Causey said.

Spanish Fort took a 21-0 lead in the first quarter and extended it to 35-0 before Pelham got on the board with less than a minute to play in the second quarter. Matt Rye connected with Ed Gipson on the Panther touchdown, but a 2-point conversion try failed. The Toros took that 35-6 lead into halftime.

Rye exited the game in the third quarter with an injury, finishing the night with 107 yards of total offense. He had 81 yards on 8-of-14 passing and four carries for 26 yards.

The Panthers scored again with 3:49 to play in the third quarter on a touchdown pass from Xavier Langford to Brandon Sledge. Nick Blackburn then caught Langford’s 2-point conversion pass to make it 35-14. The Toros scored twice more over the next five minutes to push their lead to 49-14.

Luke Deweese intercepted Langford in the final minute of the game.

Langford had 110 yards of offense in a quarter and a half of play, completing 6-of-9 passes for 45 yards and rushed 10 times for 65 yards. Gipson led the receivers with 82 yards on seven catches, while Sledge finished the night with four catches and 24 yards. He also had a one-yard rush in his only carry. Blackburn carried the ball 13 times for 53 yards.

Donnie Bell led the defense with six tackles, while Ladarius Rice, Phillip Duke and Brock Higdon each had five tackles.

Causey said the team’s first playoff appearance in four years is a testament to the Panthers’ seniors.

“I’m extremely proud of our players and the senior class and the leadership they’ve shown not just year and the last few years. I think the standard of play has changed in our minds because of our seniors. We asked them to change the expectations of the program and they did that,” he said.