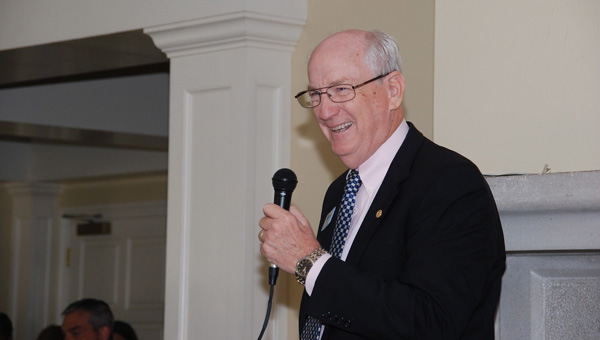 Bill Powell, who has been director of the Hoover Area Chamber of Commerce since 1996, will retire at the end of the year. (CONTRIBUTED)

HOOVER– After more than 20 years and a long list of accomplishments, Bill Powell will retire as executive director/CEO of the Hoover Area Chamber of Commerce at the end of the year.

The Chamber’s Board of Directors is in the process of finding a new director. Powell said he plans to work through the end of the year, or through January 2018 if needed to complete the transition.

Powell, who grew up in Tuscumbia and began his professional career working after school at his family’s electronics business at the age of 13, will be difficult to replace.

Powell’s family owned two stereo equipment stores in Birmingham, and in 1975, Powell moved to the Birmingham area to manage the stores.

He later worked at the Civitan International headquarters in Birmingham for about 12 years and sold life insurance for New York Life for about two years before applying for the position with the Hoover Chamber.

“I thought it would be right down my alley, and it has been,” Powell said. “I’ve loved 95 percent of it at least.”

He said he was confident he could succeed as the director, based mostly on his work for Civitan International, in which he traveled around the country to offer guidance on starting local clubs and recruiting members.

“And I had been successful with selling life insurance,” Powell said. “I thought, if I can do that, I can do anything.”

The Chamber had about 300 members when Powell started, and combined with a dues structure that had fallen behind chambers of commerce in surrounding areas, yielded a financial hurdle early in Powell’s tenure.

The new director was given a mandate of adding 10 members per month, and there are now about 1,200. Powell also worked to increase dues.

Part of Powell’s effort to attract new members was increasing recognition for the Chamber.

Shortly after he took over, Powell organized a golf tournament and Police/Firefighter of the Year Awards, which are handed out at a luncheon annually.

In addition to law enforcement and firefighters, the Chamber now recognizes paramedics, jailers and 911 operators during the luncheon.

Other special awards added recognize a school system employee and city of Hoover employee each year, and there is the Freedom Award, which honors someone associated with military service either directly or in a support role.

“That’s been a really positive thing where we recognize our local heroes,” Powell said about the Freedom Award.

The golf tournament has allowed the Chamber to distribute more than $200,000 in college scholarships, and the Hoover Area Chamber of Commerce Foundation was formed as a 501(c)(3) to facilitate donations for the scholarship program.

Powell earned a college degree from UAB at age 47, attending classes at night while also putting his children through college.

He then decided to earn his MBA, and during his last course, the UAB School of Business’ new dean and associate dean visited the classroom for an exit survey.

“I thought that associate dean was the cutest lady I had ever seen,” said Powell, who later introduced himself as someone with experience with non-profits and asked her to lunch to talk about how he might be able to help the college.

“We started out talking about what we take for cholesterol,” Powell joked about the first unofficial date with the woman who would become his wife (he and Gail have been married for 15 years).

Powell said he has always taken good care of himself, even completing marathons and 100-mile bicycle rides past the age of 60, but about two years ago felt short of breath while cutting grass.

Doctors told him he had artery blockage and installed a stent, and Powell began thinking about retirement.

Powell said that after his retirement he and his wife plan to travel and spend time with children and grandchildren, and Powell wants to walk more, ride bicycles at Oak Mountain State Park, play golf and do yard work.

“I feel like I’ve done a pretty good job here,” he said. “They seem to have been happy with me, and I’ve been happy for many years now.”