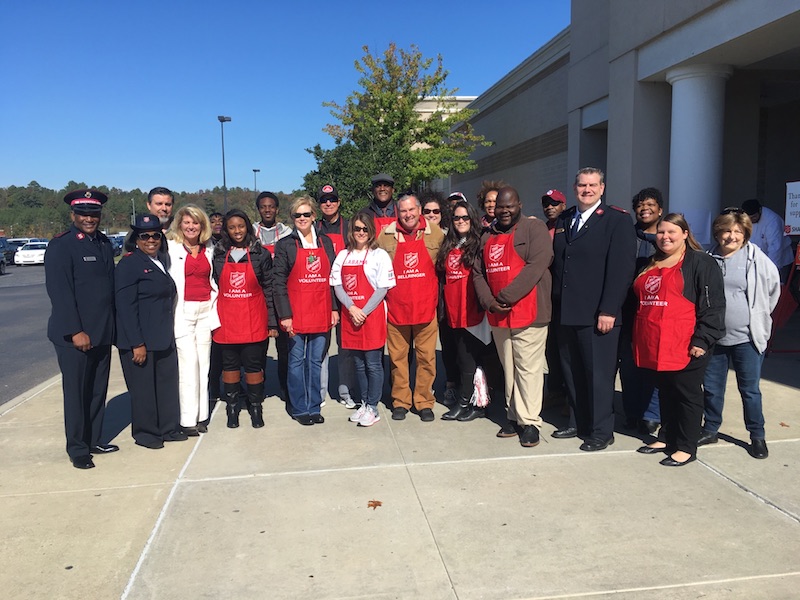 Volunteers with the Salvation Army stood outside of Belk, rang bells and took up donations for the Red Kettle campaign at a kick off celebration on Nov. 10. (Reporter photo/Amalia Kortright)

ALABASTER – About a dozen people gathered outside of the Belk on Colonial Promenade Parkway in Alabaster to ring in the beginning of the Salvation Army’s annual Red Kettle campaign on the morning of Friday, Nov. 10. According to Salvation Army Captains Rufus and Julia McDowell, volunteers will stand outside local businesses and other buildings in Chilton and Shelby Counties to ring bells and take up donations to benefit the Salvation Army’s social service programs.

“We’re going to ring bells from Nov. 10 until Dec. 23 throughout Chilton and Shelby County,” Rufus McDowell said. “We’ll have our volunteers out during the day.”

“We’re helping people to make sure that their utilities won’t get shut off,” Julia McDowell said.

The McDowells urged individuals, civic groups and churches to get involved by volunteering. The McDowells also welcomed local churches and businesses to host their own Red Kettle event during the season.

According to Rufus McDowell, the Salvation Army is looking to raise $150,000 from the community, which exceeds the goals set for previous campaigns.

“We measure our success by how many people come in to our special services programs for help,” Rufus McDowell said.

Julia McDowell said the Salvation Army typically picks different locations throughout Alabaster to celebrate the beginning of each year’s Red Kettle campaign. This is the first time the event has been held at Belk.

On the morning of the event, Julia McDowell said she was pleased to see how many volunteers were working and how many community members had come out to celebrate with them.

“We’re seeing a tremendous turnout,” Julia McDowell said. “The patrons of Belk are coming out in droves and community members are coming to us in support.”

Throughout the season, the Salvation Army will hold a “ring off” at Belk, which will feature a competition to see whether Alabama or Auburn fans can raise more money. Former Alabama player Thomas Rayam and Auburn University alumna Pam Holton

Alabaster Mayor Marty Handlon said she has seen firsthand how the Red Kettle campaign has positively impacted the community and encouraged everyone to volunteer.

“I’m just so thrilled to be here. This is a big deal. The Salvation Army touches so many lives in so many ways,” Handlon said. “I hope that everybody will take the opportunity to serve, to be that bell ringer, to show that there is a need in our community.”