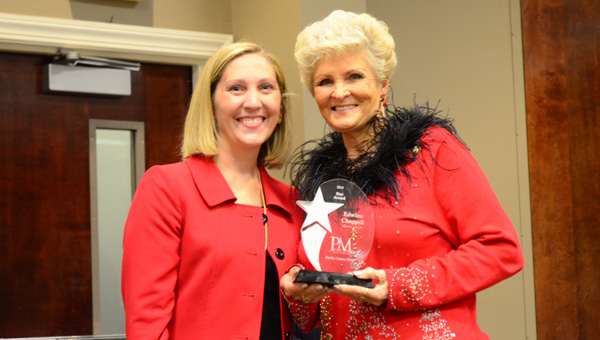 Although she has a busy and demanding schedule, Edwina Chappell always finds time to volunteer and serves as station manager for the 1,160-participant RSVP.

Having a heart for senior citizens less fortunate than herself, she uses her God-given talents to bring joy to the lives of those in assisted living, nursing and retirement facilities.

For the past 20 years, Chappell has been the choir director for the small church she attends, bringing her own equipment.

In 2016, she received a proclamation from the town of Westover her 10 years of service as stage and entertainment director for the Westover Christmas parade.

Whether designing costumes or fashions for pageants, volunteering to entertain and singing in nursing homes and other community venues or working in the family business, Chappell is a friend to all and her many talents have been an inspiration to seniors everywhere.

In 2008, she won the 22nd annual Ms. Senior Alabama Pageant. She also placed in the top 10 contestants for Ms. Senior America on the Boardwalk in Atlantic City pageant.

Chappell said Ms. Senior Alabama is “not just another beauty pageant” but is designed to enrich the lives of senior women while allowing them to share their experiences, wisdom and interest with others.

“It is a great opportunity to meet new friends and showcase your talents,” she said.

Chappell is a two-time cancer survivor and for the past 10 years, she has worked with an oncology support group sponsored by UAB’s Kirkland Clinic.

She sings and entertains for the American Cancer Society’s Relay For Life.

Chappell is involved in other pageants in Trussville, Jefferson County, Chilton County and Cullman County.

She has also modeled on a volunteer basis in many fashion shows.

She has served in numerous capacities with the Senior Alabama pageant by serving on the board, various committees and coaching contestants for state and national competitions.

Chappell and her husband Frank have been married for 55 years and have three children, four grandchildren and five great-grandchildren.

The Chappells are talented musicians and enjoy sharing their gift to enhance the lives of others.

Edwina Chappell was featured in a 2009 Senior Directory article, and her 2008 Ms. Senior Alabama Pageant picture made the magazine’s front cover.

According to the article, she was preparing to author a book chronicling all the experiences before and after the death of her daughter.

The article reads: “Since reaching the age of 60, Edwina says things have not changed much, she just says that loves to get up each day with ‘joy and a thankful heart for family, wonderful friends, and the many gifts of life’ after surviving cancer and the loss of her daughter, it is her desire to help others who may be going through the same situations, and her philosophy of life says it best.

“At the end of my journey, I hope it can be said that I made a difference,” she said.