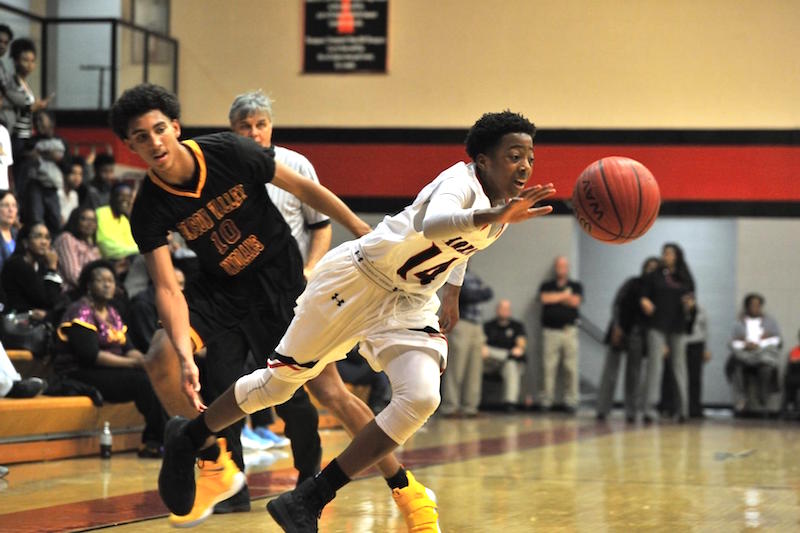 Thompson was forced to put a young roster on the floor against a top 10 team in Pinson Valley to open the season. (For the Reporter/Larry Dancy)

The Thompson Warriors 2017 season got off to a rough start Thursday night, Nov. 9 as the Pinson Valley Indians spoiled their home opener 94-47.

Thompson is shorthanded for the time being with just two upperclassmen (both juniors) on the roster. Help is on the way once football season ends, but for now, the Warriors will have to manage.

The teams traded baskets in the game’s opening minutes, but the Indians quickly deployed their full-court press. The pressure forced the Warriors into 10 turnovers in the opening period and Pinson Valley used a 22-3 run to take a 30-9 lead after the first quarter.

Thompson found their rhythm for a few minutes in the second quarter using a 10-4 run to draw within 15 of the visiting Indians, but that is as close as they got the rest of the night.

Pinson Valley ran off another devastating 18-1 run thanks to seven more turnovers from the Warriors.

“We knew coming in it was going to be a challenge against a team that presses, traps and has athletes like they do,” Warriors’ head coach Kelly Cheatham said. “We’ll keep working on ball control, taking care of the ball, securing the ball and those kinds of things moving forward.”

That talent of Pinson Valley features several Division I athletes and it showed off throughout the night against a young Thompson team.

The Warriors continued to find baskets after halftime, including Zach Littleton who scored nine of his team-leading 14 points in the third quarter.

Still, there was no answer on defense for Pinson Valley’s starting five who racked up another 30 points in the period to take an 84-39 lead into the fourth.

Pinson Valley’s Colby Jones was particularly unstoppable finishing with 30 points of his own, while Geordon Pollard chipped in 21 including some spectacular dunks.

The Indians continued to press and leave their starters in well into the fourth quarter.

“I know coach Cedric Lane, he does a great job with his teams and that’s just their style,” Cheatham said. “Whether they’re down or up 20, 30 or whatever they’re going to keep pressing and play their style of basketball.”

Thompson will travel to Helena on Tuesday, Nov. 14, before coming back home to host Huffman Thursday, Nov. 16. The Warriors will take part in the Legends Thanksgiving Tournament at Parker Nov. 20-23.